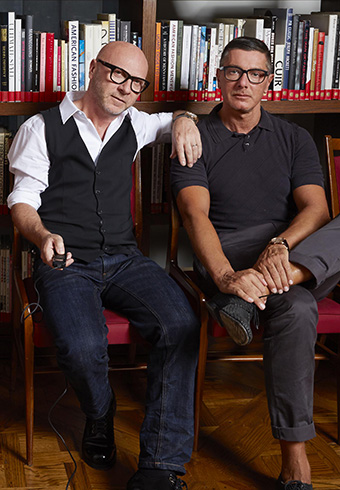 Over the past 30 years Dolce & Gabbana have endured a quite successful and luxurious career. The high fashion brand, run by Domenico Dolce and Stefano Gabbana, have held countless runway shows around the world and dressed many of the most renowned celebrities in the music and entertainment business.

Aside from their highly acclaimed fashion presence and brand, the duo has made some strides in terms of civil rights, specifically gay rights. Before same-sex marriage became a widely recognized issue to tackle, as well as legalized in a number of places, the two were openly living together, unapologetically sharing their relationship with the rest of the world.

So it came as a a surprise when the duo made derogatory comments about gay and lesbian couples having families by means of in-vitro fertilization. In early march, the former couple sat down with an Italian magazine, where they stated, “you are born with a mother and a father, or at least that is how it should be.” Dolce continued by saying, “I call children of chemistry, synthetic children. Rented uterus semen from a catalog.”

Children spawned from in-vitro are far from synthetic however. The process manually combines a real egg with sperm, before inserting the embryo into a woman’s uterus. The process is most commonly used by women who have difficulties getting pregnant, but in recent years, same-sex couple have also pursued this option as a way to begin a family. Elton John and his husband, as well as Neil Patrick Harris and his partner David Burtka, are two of the many couples who have use in-vitro fertilization.

Their comments sparked great controversy. Elton John came forward, saying that all should boycott the brand. While other celebrity allies neglected to comment on the matter, many fans of the brand expressed their upset on social media.

Following the backlash, Dolce and Gabbana issued an apology – or almost apology stating, “We firmly believe in democracy and the fundamental principle of freedom of expression that upholds it.” The statement, which was delivered by the brand’s spokesperson continued, “We talked about our way of seeing reality, but it was never our intention to judge other people’s choices.”

Since March the backlash has died down somewhat. While many celebrities have since forgotten the issue and returned to flaunting the brand’s latest line on the red carpets, the gay right organizations have not forgotten the comments and intend to not let others forget as well.