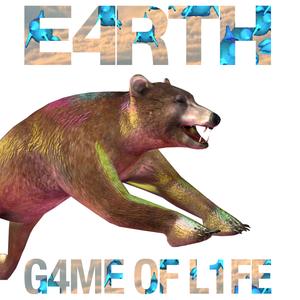 Rendered on a network of 4 Intel Macs using the Open Source software Blender, freely available 3D models, home made iPhone footage, and a pure love for computer graphics demos, GOO GET IT  tells the wild and exciting story of a daydream on an airplane gone E4RTH. Watch it once. Watch it twice. Then GOO GET YO’SELF THE G4ME OF L1FE  – a brand new mixtape from E4RTH.

E4RTH is a multimedia art/music project from songwriter/producer Alan Astor (lead vocals/production for dance trio PUNCHES). During the winter of 2010 when the blizzards were hitting hard in Brooklyn, N.Y., the isolation of several feet of snow and freezing temperatures became the catalyst for a new creative outlet.  Alan took refuge in his apartment to w

atch the glorious digital nature scenes of BBC’s Blue Planet HD series with the sound off, the seemingly existential party music of his favorite radio station (Hot97) served as the soundtrack.  In a moment, E4RTH was born. Over the next two years, as Alan traveled throughout the U.S. and Europe as producer/vocalist for the dance trio PUNCHES, he began focusing his attention to E4RTH.  Further inspiration came from the KLF and Die Antwoord’s counter-culture pop, Robert Wilson’s avant-garde theatre, Kanye’s anthemic collaborations, and Eckhart Tolle’s Neo-Spiritualism, all informing this new global style.

ODESZA ANNOUNCES FIRST EVER US TOUR