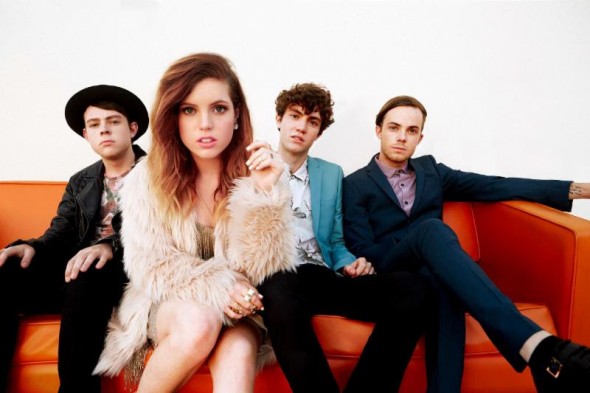 The four siblings of band Echosmith from LA already have a hit single, “Cool Kids,” at number 13 on the charts, which they have already performed for the Conan show, for the Teen Wolf afterparty, and on the Ellen show. “Cool Kids” is about being a teen and trying to fit in, and if anyone knows what it’s like to be a teen right now, it’s these four. Between the ages of 15 and 21, they have been described as “fresh faced.”

The band members grew up in a musical family, learning multiple instruments, and their solid music sense is evident. Sydney (17), the only female member, performs as lead vocalist and sometimes keyboard player. Graham (15), the youngest, plays the drums, Noah (18) plays the bass and contributes backing vocals, and Jamie (21), sings and plays the guitar. They released their debut album, Talking Dreams on October 8th, 2013 and will be doing their first headlining tour from October 29th through November 19th.

11/12/2014 UPDATE: Echosmith’s single “Cool Kids” is now certified Platinum, which they celebrated at Warner Bros. Records headquarters in Burbank, CA. The band recently finished touring with American Authors on the Honda Civic Tour, and are just wrapping their own sold-out headline run. Last week they announced a 2015 headline tour, which will kick off in February and include stops all over the country. Tickets are on sale now, with a full list of dates below.

Listen to “Cool Kids” below: