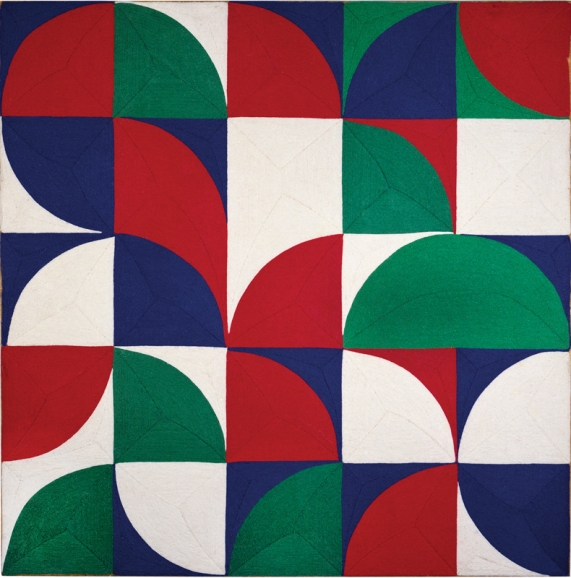 It is thanks to a square painting in the Huichol technique from the Possibilities of a Structure series dated from 1974, installed in Luis Barragan’s home in Mexico City, that quite a large number of art lovers have discovered Eduardo Terrazas’ work. He is a renaissance man in the classic mold and takes pleasure confounding various aesthetic issues throughout his life – succesfully both as an artist, an architect and urban planner. This historical Mexican figure has largely been known since 1968 when he created, with the architect Ramírez Vázquez, the logo and the design elements of the Olympic Games in Mexico City.

Since 1966, after returning to Mexico from a long period of work and studies abroad in Europe and the United States, Eduardo Terrazas began a conscious drive to recover and renovate multiple creative expressions in Mexico. One of the main focal points of Terrazas’ artistic career has been the appropriation of elements belonging to the Mexican craft tradition and national folk art culture and establishing a constant dialogue between them and different trends in contemporary art. Through this dialogue Terrazas opened up a permanent process of renovation and evolution of both traditions.

During the 1970´s, Terrazas experimented with geometry, playing with formal relationships between geometric elements in countless drawings. He designed works that he then produced in the Huichol technique, which is made using colored yarn on wax-covered wood boards. The series Possibilities of a Structure is an endeavor to systematize these formal geometric games; the structure Terrazas had chosen, which he named Cosmos, would prove, over the following ten years, to be an unending source of visual exploration. Other structures like Nine Circles,Diagonals, Grid and Bar Code, would later enhance the concept of the Possibilities of a Structure series.

In his new opus named Constellations, Eduardo Terrazas is inspired again by Mexican crafts to produce works made from coloured pearls using an old Indian technique known as “Chaquira”.

His exhibitions are brightened by giant coloured balloons derived from his childhood memories; first appearing in the 1968 Olympic Games. Once again, using popular culture, Eduardo Terrazas took a widely used Mexican toy as a source of inspiration, in this case the balloons sold to kids in the streets of Mexico.

Eduardo Terrazas is one of the founding artists of the Mexican contemporary art scene long before Gabriel Orozco, Francis Alÿs or Tomas Saraceno.

A SPECTATOR ON THE STANDS OF HISTORY @ ART AMALGAMATED - NEW YORK