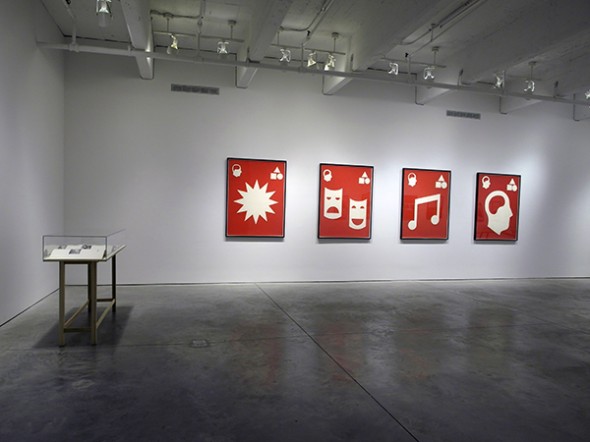 OPEN TO THE PUBLIC JANUARY 8 – FEBRUARY 9

Tracy Williams, Ltd.
521 West 23rd Street
New York, NY 10011
212.229.2757
www.TracyWilliamsltd.com
Ersatz Affiches brings together the work of Barbara Bloom, Ernst Caramelle, Anna Craycroft, Simryn Gill, and Matt Mullican to ruminate on how we read images in popular media and the knowledge systems they create. As the “ersatz” of the title indicates, an element of trickery is at play. Through subversion and inversion, the conventions of formats like posters, magazines, and coffee table picture books are highlighted.

Barbara Bloom’s Fake Travel Posters (1981) invoke the look of informational posters, the kind that line the walls of bureaucratic offices. To aid in the navigation of (frequently bewildering) official forms, their design necessitates simplicity and clarity. Into this visual order, Bloom inserts doubt with provocative juxtapositions between image and text. Produced in the early days of the Reagan administration, the work speaks to the profound intervention of marketing and spin control into the geopolitical context.

Anna Craycroft’s Screen Memories (2009) suggest another kind of advertisement, mimicking 20th century movie posters. Each represents a different fictional film through the use of iconic imagery and typography, referencing genres from romance to horror. The film titles, borrowed from writings on child development by psychoanalysts such as Freud, Klein, Winnicott, and others, are playfully re-contextualized as narrative headlines. This body of work continues Craycroft’s investigations into the ways in which definitions of childhood shape personal and cultural narratives related to the construction of individuality.

Matt Mullican’s untitled sign paint on paper works (1981) are early iterations in the development of his idiosyncratic cosmology. Mullican appropriates international symbols such as music notes, masks of tragedy and comedy, and so forth, and places them within his color-coded system. The presence of recognizable symbols-and the use of sign paint, a material of public communication-within a subjective semiology produce a provocative paradox, thwarting a stable reading.

Simryn Gill and Ernst Caramelle explore the relationship between image and text in books as a metaphor for how we organize meaning. Caramelle’s Forty Found Fakes (1976-1978) is a catalog of found newspaper clippings. On each page there is a “fake,” an image that suggests work of his predecessors and influences-Vito Acconci, Daniel Buren, Hanne Darboven, and Fluxus, for example-with their name listed beneath. With wry elegance, Caramelle comments on the instability of attribution and the author’s function.

In 32 Volumes (2006) Simryn Gill effaces the text of the Life World Library series, a mid-century encyclopedia of civilizations produced by Life magazine. Perhaps the most significant contributor to the mid-century branding of America, Life magazine relied heavily on images as the convincing counterpoint to narrative of the text. With the colonial and cold war undertones of the volumes gone, a shift occurs in reading, creating a deliberative space that includes the viewer in the process of meaning-making.

Through appropriation and allusion, the works in the exhibition all employ the material of 20th century adverting. Anachronism-some of it contextual and some of it purposeful-creates a compelling point of contrast with the contemporary intervention of marketing into every aspect of our lives. The questions begged by this contrast anchor Ersatz Affiches.

0
The Untitled Magazine January 8, 2013
No Comments Yet