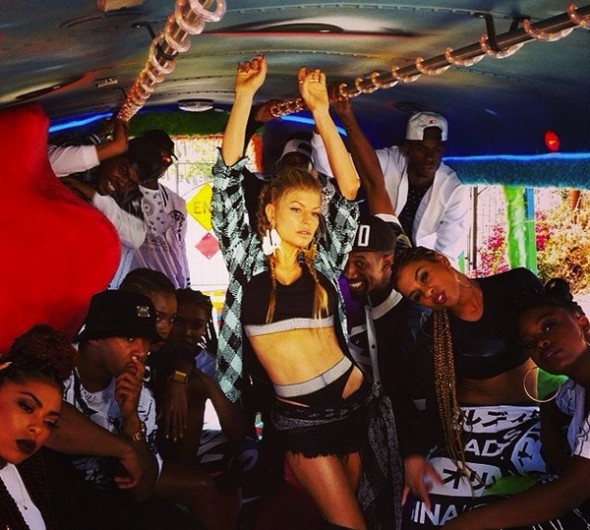 Eight-time Grammy Award-winning singer Fergie has dropped the video for the remix of her current hit single “L.A.LOVE (la la).” The eye-popping video was directed by Rich Lee, who has also directed clips for Fergie’s “Clumsy.” The video celebrates the love Fergie has for L.A.; from the bikini clad LA girl look she flaunts to the party scene she celebrates. The video features her rolling through the streets of the city on a custom psychedelic party bus, from downtown to South Central, to Venice Beach and up to Hollywood Boulevard’s Mann’s Chinese Theatre. The highly elaborate design of her ride, which includes a huge Mexican Day of the Dead mask on the bus’ front, was inspired by the art cars at Burning Man and was built from scratch from the bones of an old school bus.

Fergie was involved in planning every detail of the shoot from the casting to the locations to the styling, with several of her outfits coming straight off the runway, including a sequined plaid shirt and white bodysuit created by New York designers The Blondes. One of the more prominently featured looks is a blue, white, and red bodysuit from Jean Paul Gautier’s last-ever ready to wear collection, which was unveiled at the end of September. The Chanel megaphone Fergie uses in the video is the same one Giselle used in the Paris Spring 2015 show. Other stand-out looks include a custom LA LOVE basketball jersey created especially for Fergie by Michael Schmidt (Madonna, Cher, The Black Eyed Peas), as well as pieces by Alexander Wang, Chanel, Saint Laurent, and Versus by Versace.

Fergie invited a slew L.A. icons to the shoot, who all appear in the video, including YG, who raps on the track; the song’s co-writer and producer DJ Mustard; Kelly Osbourne; Chelsea Handler; Ryan Seacrest; DSquared2 head designers Dean and Dan Caten; Hilary Swank; LA Clippers Blake Griffin, Chris Paul, and DeAndre Jordan. NBA super fan James Goldstein, whose Beverly Hills pad The Untitled Magazine shot in for our features with Carmen Electra for the Music Issue 6 and Brooke Candy for the Legendary Issue 7 also makes a cameo in Fergie’s video, alongside Pretty Reckless front woman Taylor Momsen. Released in September on will.i.am music / Interscope Records, “L.A.LOVE (la la),” marks Fergie’s return to music. It is her first new track since “A Little Party Never Killed Nobody,” which appeared on the soundtrack to the 2013 film The Great Gatsby.