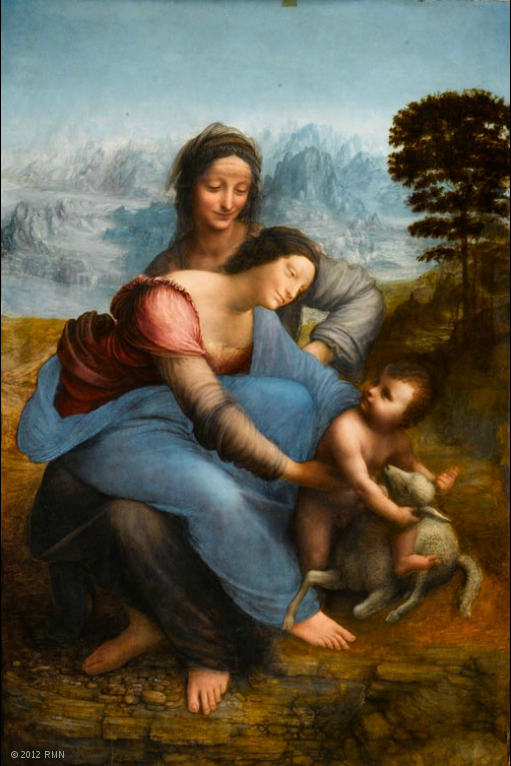 Salvatore Ferragamo is the sponsor of the latest exhibition of Leonardo da Vinci’s work at the Louvre, titled “The Saint Anne, Leonardo da Vinci’s Ultimate Masterpiece.”  The exhibit was launched in honor of da Vinci’s recently restored oil painting on wood, “The Virgin and Child with Saint Anne,” created around 1510. The exhibition will be on display at the Louvre from March 29 to June 25 alongside the rest of the museum’s collection of da Vinci’s work, which of course includes his iconic masterpiece “Mona Lisa,” as well as some of his compositional sketches and landscape studies. The exhibition will also bring together pieces related to da Vinci’s Saint Anne, which he worked on until his death, and will include tributes to the artist by Max Ernst, Eugène Delacroix, and Edgar Degas. Because of Ferragamo’s involvement in the show, the Louvre is allowing the fashion label, for the first time ever, to host their 2013 Resort collection show inside the Louvre, beneath the glass pyramid, followed by a dinner and a private tour of the museum.  The show on June 12th will also be live-streamed on Ferragamo’s website, so those who can’t get a coveted seat inside can still participate in this historic fashion moment. Chairman of the Ferragamo Group, Ferruccio Ferragamo, said of sponsoring the event, “It is a great honour for our family and our fashion group to have been chosen amongst the other highly esteemed contestants to sponsor this exclusive event. Endless creativity, an innovative aesthetic, artisanal roots and groundbreaking research have always characterized the Italian genius as embodied by Leonardo da Vinci and that we have always appreciated. These are values dating back to my father that have inspired our work and the reality of our company.”