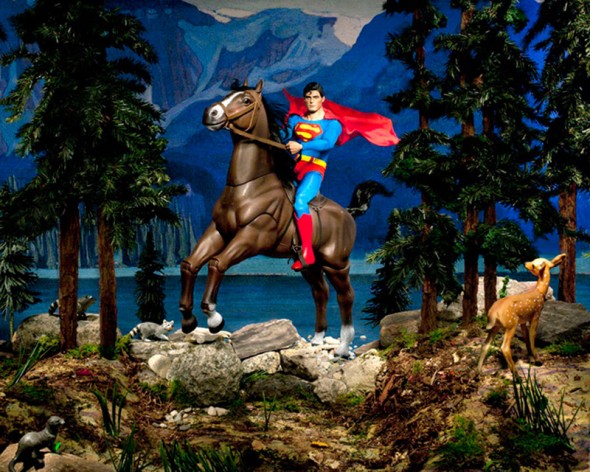 POL-ETHICALLY CORRECT will be Italian artist, Fidia Falaschetti’s first exhibition in the U.S. Falaschetti presents a wide range of multi-media pieces that delve into the concepts of commercialism, consumerism, pop culture and the globalization of mainstream media. For this exhibition, the artist explores the relationship between digital and analog, appropriating materials and elements of the past and transforming them into impactful contemporary objects. As an artist with a commercial design background, Falaschetti brings something different to the realm of socio-political art. He has witnessed the effects of commercialism and mainstream media and has now taken a step back to critique and analyze the consequences on both consumers and the art world.

Fidia Falaschetti creates work that is satirical and playful but also confronts the viewer to think about how and what they consume. This contrast between lighthearted and weighty subject matter is a thread throughout the work shown in POL-ETHICALLY CORRECT, forcing the viewer to consume, and most importantly, to reflect.

In the gallery’s project space, Canadian photographer Diana Thorneycroft presents Canadians and Americans (best friends …it’s complicated). Thorneycroft transports us to a surreal dimension, where staged totems of American culture and identity collide with allusions to her native Canada. With the series Thorneycroft presents chromogenic print photographs and a special installation of these provocative tableaus, each piece dripping with dark humor and a subversive whimsy. Apparent in the artist’s photographs is a dialogue on mass media and popular culture. Specifically she finds herself dissecting the Canadian-United States socio-political dynamic. Employing the use of action figures, toys, and familiar imagery, Thorneycroft unveils a fanciful world full of irony and at times heavy subject matter. Moments of absurdity are cunningly juxtaposed with layers of serene landscapes and backdrops, interspersed with both somber and lighthearted characters. Her photographs depict violence, sexual tension, and the tenuous fraternity between contradictory cultural icons; these elements work collectively to convey a message of satire, all rendered within the artist’s meticulous environments.