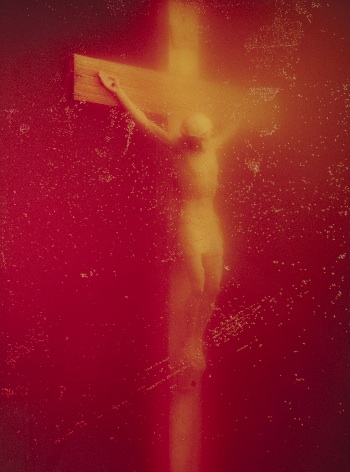 Fire In Her Belly

Maloney Fine Art will be presenting Fire in Her Belly, an exhibition that revisits the role of censorship, surveillance and suppression of artists during the culture wars sparked by the AIDS crisis in the United States. At a time when silence was defined as death, the Senate, American Family Association, and growing momentum of the religious right waged war against the free speech and funding of artists. The notorious censorship of Andres Serrano, Robert Mapplethorpe, and David Wojnarowicz has become synonymous with this moment.

Fire in Her Belly shows these artists for the first time in direct conversation with their equally inflammatory precursors and contemporaries such as Julie Tolentino, Lisa Kahane, Paulette Nenner, Connie Samaras, Clarissa Sligh, Anita Steckel, Annie Sprinkel + Beth Stephens and GANG making the argument that the role of gender and feminism needs to be considered more closely in relationship to this period and its legacy. The exhibition goes on to to chart how critiques of nationalism, religion, racism, and sexual and gendered norms are circulated and silenced in the spheres of the virtual and international, including examples of videos by artists such as Pussy Riot and Ai Weiwei.

Questions about what constitutes decency and obscenity reflected the intertwined backlash against feminism and gay liberation with the United State’s government neglect of the AIDS crisis. The battles of culture wars were waged over individual artists, bringing conversations out of the gallery into the living room, and eventually to the Supreme Court (National Endowment for the Arts v. Finley, 1998). Richard Meyer coined the notion of “The Jesse Helms Theory of Art” to describe the unintended consequences of censorship: the suppression of a work of art paradoxically makes it more visible. In the cases in the cases of Robert Mapplethorpe, Andres Serrano, and David Wonjnarowicz, controversy rendered their work iconic.

While two members of the NEA four were women (Holly Hughes and Karen Finley) and feminist artists cause much moral panic for the religious right, scholars including Richard Meyers and Carol Jacobsen have noted that censorship and suppression of women artists does not attract the same level of attention as that of their male peers. As Meyers writes, “For a work of art to arouse public controversy, it must cross a certain threshold of visibility—whether through museum or gallery exhibition, visual reproduction in the press, or attacks by would be censors. Until quiet recently visual art by and about lesbians has been restricted from reaching this threshold of visibility within American culture.” This is true not only of lesbians, but also of women artists more generally. Jacobsen’s groundbreaking article “Redefining Censorship: A Feminist View (1991)” explores how funding, internalized oppression and institutional biases function as censoring forces alongside explicit examples of silencing. While there have been a handful of notable attempts to canonize these less visible works such as WACK! Art and the Feminist Revolution (2007, Geffen Contemporary at MOCA) and Modern Women (2010, MOMA), these exhibitions further contribute to the compartmentalization of historical narratives around identity politics rather than the much-needed project of evaluating their cross-pollination.

The influence of feminism in the activist strategies of ACT UP has been documented by Jim Hubbard and Sarah Schulman in the ACT UP Oral History Project and by Ann Cvetkovich in An Archive of Feeling: Trauma, Sexuality and Lesbian Public Cultures (2003). These audio and text based projects create the theoretical backdrop for a yet to be realized visual analysis of the connections between social movements. In conversation, artwork from second wave feminism and the AIDS crisis illustrate the persistent and effective challenges subcultures have posed to notions of citizenship and sexuality in the United States. While the exhibition insists on the importance of individual women in the culture wars, it is equally invested in complicating ideas about the importance of any singular work or artist in a social movement. It is an exploration of how collectively generated aesthetic and conceptual strategies challenged deep-seated beliefs in ways we are still talking about.