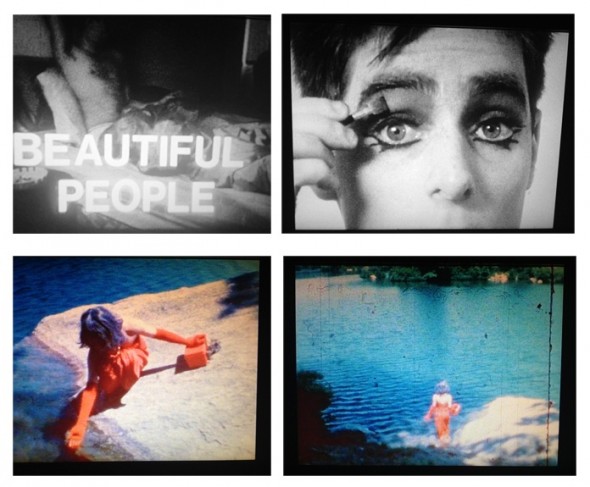 Praz-Delavallade will be presenting nine artists’ works that reflect and explore themes from a 1988 silent super-8 film by David Wojnarowicz.

In Wojnarowicz’s film titled Beautiful People, the black-and-white film turns into color at precisely the moment when its central and sole character, played by Jesse Hultberg, dressed in daytime drag, came into contact with an upstate New York lake in what appears to be a suicide attempt. Elation and death, held together and compressed into a singular graspable moment, uproots the previous state of consciousness. What have we been seeing when we watched him waking up, putting on makeup, hailing a cab in an escape from New York to the woods? What did he pack into his plastic box besides a framed image of Siamese twin skeletons?

Tracking the journey from slumber to death, for this exhibition, nine artists’ works set an alternative mise-en-scène of the rarely screened film. The exhibition title is a reworking of the chapter “Losing the Form in Darkness” in Wojnarowicz’s book Close to the Knife: A Memoir of Disintegration (1991). To draw on the mundane history of the artist, telephone answering machine messages puncture the silence of the exhibition in the form of text and/or recording.

Each work in the exhibition lays open a different territory of Wojnarowicz’s video, but above all, as attempts to give form to something as fugitive as loss. Predominately abstract and concerned with the history of material as a form of narrativity, they embody a sense of life, of fate, of necessities. Fate with a sense of knowing that this might not be it, but it’s necessary.