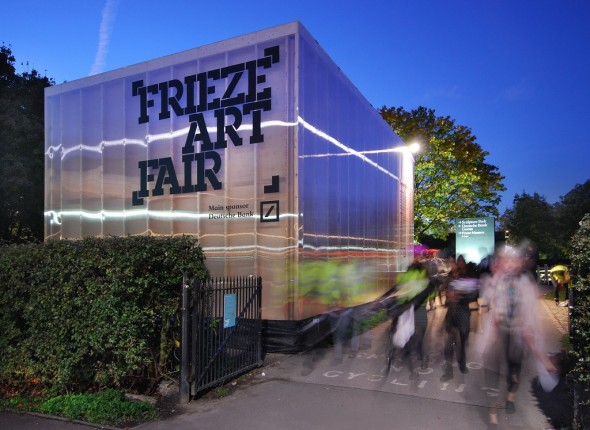 The 11th edition of Frieze London, the leading international contemporary art fair, takes place in London’s Regent’s Park from 17–20 October 2013. Frieze London is sponsored by Deutsche Bank for the tenth consecutive year. Redesigned for 2013, Frieze London brings 152 of the world’s leading contemporary galleries to the UK this October. The change in the design of the fair will introduce more sizable public areas and wider aisles as well as a new layout of galleries. View a selection of works to be presented at this years Frieze in our article on gallery highlights online at: http://untitled-magazine.com/frieze-london-2013-gallery-highlights/

Exhibitors from 30 countries will participate in the 11th edition of the fair confirming the fair’s position as one of the world’s leading contemporary art events. This year’s gallery list includes those from territories including Brazil, China, Columbia, Hungary, India, Korea, Mexico and South Africa.

The selection of the Frame galleries was advised by curators Rodrigo Moura and Tim Saltarelli. For the second time Frieze will present Frieze Masters,
to coincide with Frieze London, a new fair with a contemporary perspective on historical art. Together the crossover between the two fairs build a broad international art audience.

Newly appointed this year, Nicola Lees is the curator of Frieze Foundation and has conceived a programme of commissions that centres around ideas of play and governance, focusing on how these exchanges can be brought to light through participatory contemporary art practices. Frieze Projects is the programme of artists’ commissions realised annually at Frieze Art Fair and supported by the Emdash Foundation.

In addition to commissioning these five new works, the programme will also explore the process and conditions of commissioning artist films with a think tank (16 October 2013) and a panel discussion (18 October 2013) in the Frieze London auditorium. Entitled ‘New Partnerships Between Art & Film’, the think tank and panel have been developed in collaboration with CPH:DOX, the CineMart of the International Film Festival Rotterdam (IFFR) and LUX, and are programmed by ART:FILM.

0
The Untitled Magazine October 7, 2013
No Comments Yet