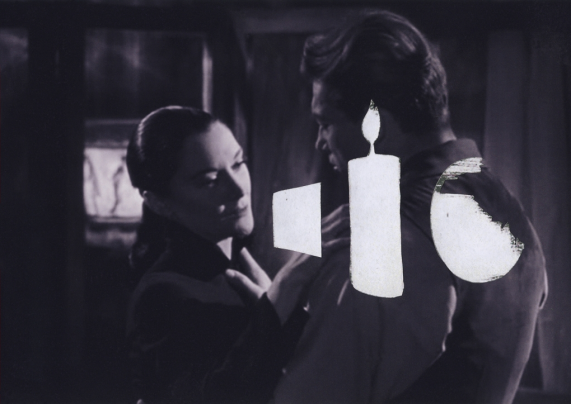 Almine Rech Gallery is pleased to present the second solo exhibition by Gregor Hildebrandt in Brussels.

Gregor Hildebrandt was inspired for this exhibition by a painting by René Daniëls: “I saw this work only once, when I was an adolescent, through a glass door at Documenta 92”. The picture shows a space in which several paintings appear in white against a dark background. Gregor Hildebrandt sees this project as a tribute to Daniëls. He reinterprets the painting by preserving its dimensions and replacing its bluish-black colour with tape from audio cassettes. These cassettes feature recordings of the Jacques Brel song “La quête” (The quest), taken from the musical comedy Man of La Mancha. “I chose this song because for me Daniëls’ painting evokes traumatic associations: the candle-like painting shines like the star in Brel’s song”.

Taking this painting as the focal point of the exhibition, Gregor Hildebrandt has transposed its composition to the space of the gallery, thereby creating a mise en abyme. Wrapped in black like the space created by Daniëls, the walls of the gallery are entirely covered in tape from VHS cassettes. The pictures follow the original composition before gradually distancing themselves from this arrangement as the visitor penetrates further into the installation. The film recorded on the VHS cassette tape covering the walls is Jean Cocteau’s Orpheus. With this reference, Gregor Hildebrandt convokes recurrent elements of his work in the exhibition, such as mirrors, water and reflections. Lyrical and romantic, the film suggests a particular atmosphere and intimates that something always lies beneath the surface.

For this exhibition Gregor Hildebrandt has also created a large triptych inspired by Paul Celan’s poem “Zähle die Mandeln” (Count the almonds). Its motif is taken from a film by Ute Aurand showing the sound wave of Celan’s voice. The wave reminds the artist of Robert Motherwell’s “Elegy”. Gregor Hildebrandt concludes: “I think another version of the story exists in which, in order to raise his love from among the dead, Orpheus has to sacrifice his voice. The paintings, however, remain silent on this”.

Gregor Hildebrandt was born in 1974 in Bad Homburg, Germany. He lives and works in Berlin. In 2013 he took part in the group exhibition “Decenter: An Exhibition on the Centenary of the 1913 Armory Show” at the Abrons Arts Center in New York. In 2012 he was the subject of an exhibition with Jorinde Voigt at Museum van Bommel van Dam in Venlo, Netherlands. He also took part in the exhibition “A House Full of Music” at the Mathildenhöhe Institute in Darmstadt, Germany. In 2013 his work will be featured at the Nuremberg Kunsthaus in Germany, and he will participate in a show organised by the Chalet Society on the island of San Servolo during the Venice Biennale.