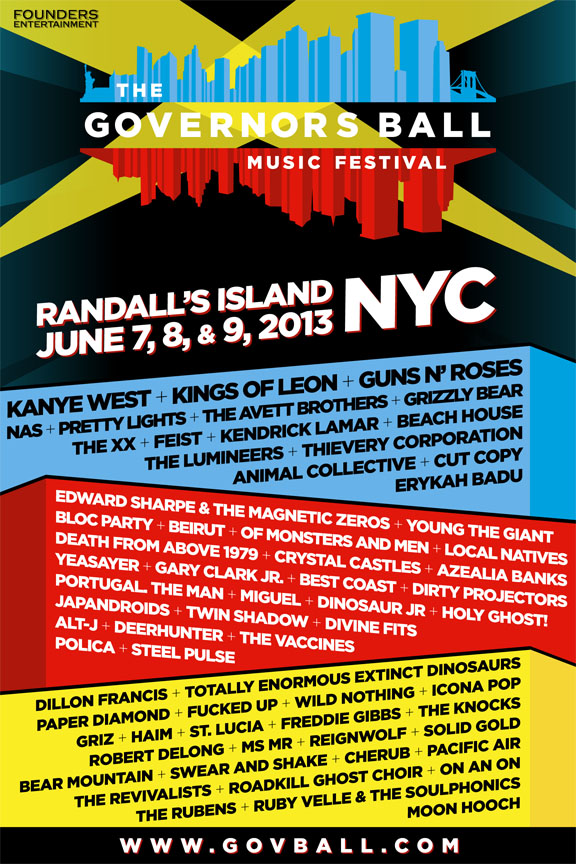 Founders Entertainment announces the addition of Guns N’ Roses as the third headliner for the 2013 Governors Ball Music Festival.

“We’re stoked to be performing at the Governors Ball!” says Axl Rose, “we’re all really excited in GNR to be part of this festival, and with such talented and diverse acts in what looks to be a great weekend!!” The 3rd annual edition of New York City’s marquee live music event will be held Friday June 7th through Sunday June 9th in Randall’s Island Park and feature over 60 world class performers, showcasing a wide spectrum of Dance, Indie Rock, Hip Hop, Americana, Electronica and Pop all weekend long.

With its expansion to three days of Music, Art, and Entertainment, and an impressive list of talented performers, The Governors Ball Music Festival drew considerable attention upon the announcement of the 2013 lineup. Within five minutes of tickets going on sale on Friday, January 25th, both Early Bird and Advanced priced tickets had sold out.

Along with expanded programming in 2013, Founders Entertainment will unveil a new festival site layout to the grounds at Randall’s Island Park, giving music fans extra space to spread out and fully enjoy the amazing performances and art installations. Governors Ball 2013 will also build upon the collection of highly regarded NYC food-trucks and restaurants providing culinary delights at this years event. 2013 will included favorites from last year like Luke’s Lobster, Cool Haus ice cream, Asia Dog, Ports Coffee & Tea, and Pie For The People, as well as new additions including Brindle Room, Mexicue, Bare Burger, Little Muenster grilled cheese, Num Pang sandwich shop, Wooly’s, and La Sonrisa empanadas among other vendors to be announced.

As in years past the Governors Ball grounds will feature an array of fun activities including a silent disco, ping-pong, lawn games, a life sized game of Connect 4, and more. After working up a sweat dancing to a favorite band or competing in an intense game of ping-pong, attendees will be able to help themselves to one of the 8 free water refill stations on the grounds. The stations will feature state of the art filtration systems (including ultraviolet sterilization), bringing music fans refreshing and great tasting drinking water free of charge, so they can keep hydrated while at the same time reducing the amount of plastic bottles used at the event.

TYING TIFFANY TO RELEASE "ONE," HER NEW EP