Fur and fashion have long had a love/hate relationship. Of course, in cavemen times, there was no moral question: fur = good. But in these modern times, we have plenty of warm man-made materials that can keep us alive. So why use fur? Well first of all, it looks and feels luxurious, and it has become a symbol of high class and glamor. A few decades ago, a fur coat was something that a woman bought (or received as a gift) and wore for the rest of her life. The question of whether or not to wear fur, or even allow fur to be sold, should be about ethics, but as it turns out, it’s more about trend.

There is no question that fur has come back in style. It started in the 2000s. Global fur sales rose by 70% from 2000 to 2010. When dyed and combed sheepskin became the rage, it opened a door for fur to reclaim its place in fashion. The trend reached the height of its popularity on the winter 2012/2013 runways, where almost every look came with some fur trim, if not an outright fur ball coat. The renaissance of fur now poses a major challenge to anti-fur campaigners such as Meg Mathews, who is now leading the latest effort by People for the Ethical Treatment of Animals (PETA) to persuade people to stop wearing furs. PETA was largely responsible for getting fur out of fashion during the 90s, especially with its “I’d rather go naked than wear fur” campaign. Mathews recalls, “I remember when PETA released its first iconic ‘I’d rather go naked than wear fur’ campaign in the early 1990s – back when few people had ever seen a video or even a photograph of how horribly animals die for fur. The impact was huge. Almost overnight, wearing fur became unfashionable and designers couldn’t wait to shout about how they were fur-free and fabulous.”  This was when retailers such as Selfridges and Liberty brought in strict no-fur policies. Designers including Stella McCartney, Vivienne Westwood, and Simone Rocha also decided to go fur-free. Harvey Nichols started its no-fur policy a decade ago, in 2004, due to protests coordinated by CAFT (Coalition to Abolish the Fur Trade).

Paula Reed came on as fashion director at Harvey Nichols, a newly created position, in September of 2012. In her time there, she started pushing for less restriction in the no-fur policy. Under her direction, certain clothes trimmed with fox, rabbit and raccoon fur found their way onto the shop floor. Then, in 2013, the no-fur ban was effectively lifted. Reed resigned as fashion director in October 2013, not in a direct response to protesters who were calling for her removal, but there’s been speculation that Joseph Wan, the store’s chief executive, asked her to leave for that reason. PETA has been calling the store to “realign itself now with the ethical values of the British public,” 95% of which are against ever wearing real fur. 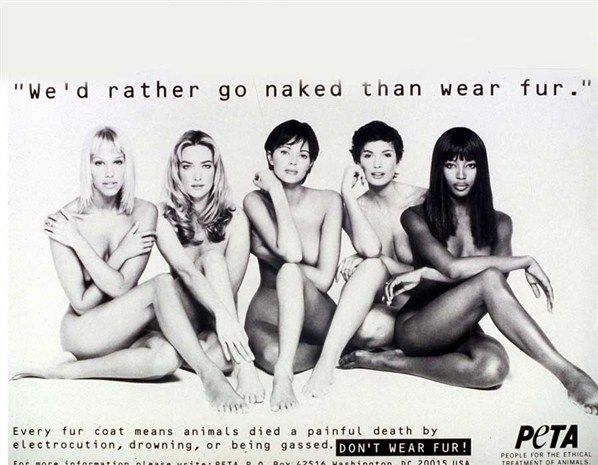 Harvey Nichols is not the only one who has gone back to a no-fur policy. Another defector is Naomi Campbell. She famously declared she would rather go naked than wear fur, appearing in the iconic PETA anti-fur advert (above), and walking down a 1994 runway naked with only a banner stating, “I’d rather go naked than wear fur.” In 2010, she appeared in a campaign for Dennis Basso wearing ONLY fur. I guess some things change.

Cindy Crawford is another high-profile celebrity who has gone back to fur. Some supermodels and fashionistas continue to wear it regardless of the trend at the moment. Anna Wintour continued wearing fur, even through the 90s when it was so taboo that she once had a dead raccoon dumped on her plate in a New York restaurant because she persisted on wearing her mink coat. Kate Moss is another one who unapologetically wears fur, and a lot of it. But she still manages to stay friends with designer Stella McCartney, who is strongly opposed to wearing fur, and actress Sadie Frost, who launched a high-profile anti-fur campaign a year ago. In replies to her seemingly contradictory behavior, Moss said, “I don’t care what Sadie thinks. She has her own mind and I have mine. I wear what I want to wear.”

Maybe that’s what it comes down to: personal choice. Alice + Olivia designer Stacey Bendet is a vegan but nonetheless wears fur and uses it in her collection. She’s the first to admit, “It doesn’t make sense…Something about putting it inside me feels really barbaric. Something about wearing it just feels a little glamorous.” There are many sides to the story, and it isn’t as simple and obviously wrong as the images of dead, flayed rabbits on the Heartless Harvey Nichols posters. Silvia Fendi justifies the use of real fur as preferable to fake because, as she said, “We did a collection of fake fur several years ago but found it is the most polluting thing for the environment.” Students in the fashion industry find a lot of individual variation in the ethics of using animal products. Some will not use any type of animal byproduct. Some will only use it if it was humanely farmed, some only if it was not from an endangered species, or only if it was from an animal that humans typically eat. Some will use fur, but just not from animals they think are cute. Then there are websites like Fur Is Green, which is actually arguing the idea that fur is a natural resource that we should have no qualms about using; a resource that just happens to be on the backs of living creatures.
A cursory investigation into the fur trade reveals information of abuse and images that are impossible to ignore. The bottom line is whether or not animals are suffering cruelty, and despite humane farms — places where “every part of the animal is used” — animals are still suffering cruelty. For the protesters at Harvey Nichols, it is a black and white issue. And sometimes brown-spotted. In a video posted on November 2014 on YouTube, a Heartless Harvey Nichols protester speaks through a loud-speaker: “This last week, three protesters were arrested standing around the corner from Harvey Nichols at the back of this injunction, and one of them was a pensioner with Parkinson’s disease.” She went on to say, “We’re not in North Korea. How dare you try and stop us from peacefully protesting!” For Harvey Nichols, the protesters are annoying. For animals in the fur trade, Harvey Nichols’ repeal of their anti-fur policy is annoying. Unfortunately, that’s where the issue stands at the moment: 10m away from the storefront.
– Article by Lydia Snyder for The Untitled Magazine

JULIA ROBERTS IS THE NEW FACE OF GIVENCHY