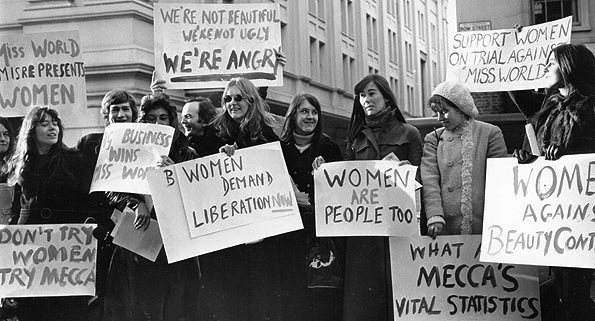 In modern day pop-culture, the term “feminist” has found itself casually thrown about by today’s most famous pop-stars. Two of today’s most ubiquitous pop princesses, Miley Cyrus and Katy Perry, proudly vocalize that they themselves are feminists, despite the fact that they might be misinformed about what this truly means, and subsequently misinterpret or misrepresent the label.  In layman’s terms, feminism is the belief that women have the right to enjoy social, economic, and political equality to their male counterparts—it does not inherently promote public displays of raunchy sexuality, or justify the wanton whims of these very public women. Speaking in terms of history, famous names like Yoko Ono and Gloria Steinem come to mind as feminists who made an impact on the world; these women not only defined and popularized the term in itself, they sought to promote feminist actions that stood alongside their powerful words.

“I feel like I’m one of the biggest feminists in the world because I tell women not to be scared of anything.” This is a quote from Miley Cyrus, who is most recently making headlines for her extremely sexualized image. The 21-year-old pop singer underwent a widely publicized ‘physical transformation’ after cutting her long locks off into a short, blonde pixie cut. It wasn’t too long after the haircut that the singer started speaking out about how cutting her hair off made her a feminist because of how “liberating” the experience was. Sure, cutting almost 24 inches of hair off might feel liberating but doesn’t necessarily qualify as a feminist action. Did Miley Cyrus chop her locks because she was oppressed by her hair, or because having a pixie cut is en vogue, and the drastic change might earn her media coverage and attention? Back in 1968 a group of 400 women gathered to protest the Miss America Pageant in a demonstration of women’s rights. The women protested against the pageant by throwing typical feminine products (household cleaning items, cosmetics, etc.) into trash cans and waving banners and signs on the Atlantic City Boardwalk. The demonstration was very much responsible for shedding light on the Women’s Liberation Movement, as well as giving women of the 60s a voice in the media. The women who participated in the deliberate public destruction of items which symbolized their oppression paved the way for somebody like Miley to be able to cut off her hair, and point towards feminism as her motivation. Many similar occurrences would take place from that day in Atlantic City until the day that America’s most recent self-proclaimed ‘feminist’ pop princess was born.

Katy Perry was recently on an Australian morning show declaring that she has finally become a feminist; she’s quoted saying “I used to not really understand what that word meant, and now that I do, it just means that I love myself as a female and I also love men.” but feminism isn’t just self love, and loving men; it’s promoting a view of women in society as equal to men in every capacity, and as more than simply objects of sexuality. Looking back at the colorful career of the singer, it’s hard to pinpoint what exactly makes her believe that she’s a feminist. Could it be her first single “I Kissed a Girl”? Or could it be that she’s under the impression that walking around in a sparkly leotard while men fawn over her is loosely considered feminism? Without her elaborating on the subject we may never know, but if you take a look back on the career of Yoko Ono, you may see some discrepancies with Perry’s idea of the word… 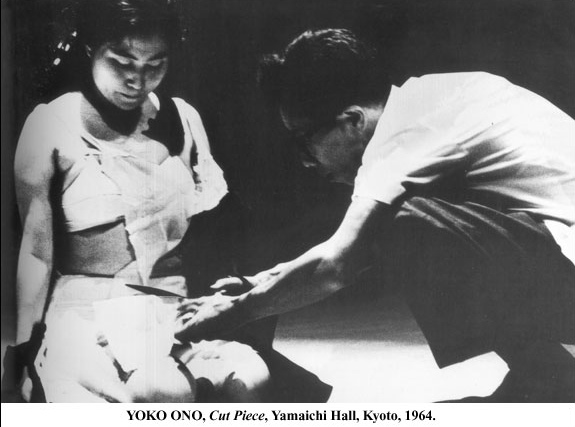 Yoko Ono, who many recognize more for her relationship with late husband John Lennon than for her own work, has been breaking barriers since her career first began. Although not many are aware of the impact that her early work had, the artist pushed societal boundaries on many different levels. Back in 1964, Yoko presented one of her most prominent feminist works onstage in what she called “Cut Piece”. As she sat on stage, audience members approached her with scissors and cut away at her clothing. The interpretation of how the world is always trying to sexualize women remains relevant to this day. Seven years later Yoko published a manifesto entitled ‘The Feminization of Society,’ wherein she more or less begs women to look at their lives and decide whether or not they want to be overrun by men.

“I am proposing the feminization of society; the use of feminine nature as a positive force to change the world. We can change ourselves with feminine intelligence and awareness, into a basically organic, noncompetitive society that is based on love, rather than reasoning. The result will be a society of balance, peace and contentment. We can evolve rather than revolt, come together, rather than claim independence, and feel rather than think. These are characteristics that are considered feminine; characteristics that men despise in women. But have men really done so well by avoiding the development of these characteristics within themselves?”

When John Lennon stepped away from music to raise his youngest son Sean, he kept no secrecy when it came to his ‘stay-at-home father’ position. Caring for his son and infamously “learning to bake bread,” John went above and beyond during his later years while taking over the reins of what is typically the ‘woman’s’ role in the household. Many questioned his actions and claimed that Yoko was “wearing the pants in the relationship” but truthfully, that’s how the couple wanted things. During their infamous interview with Playboy magazine, the couple revealed that while John was at home tending to the baby, Yoko was “sitting in rooms full of smoke with men in three-piece suits that they couldn’t button.” Simply put: Yoko was off doing business while John was home, which sparked the term ‘house husband.’ 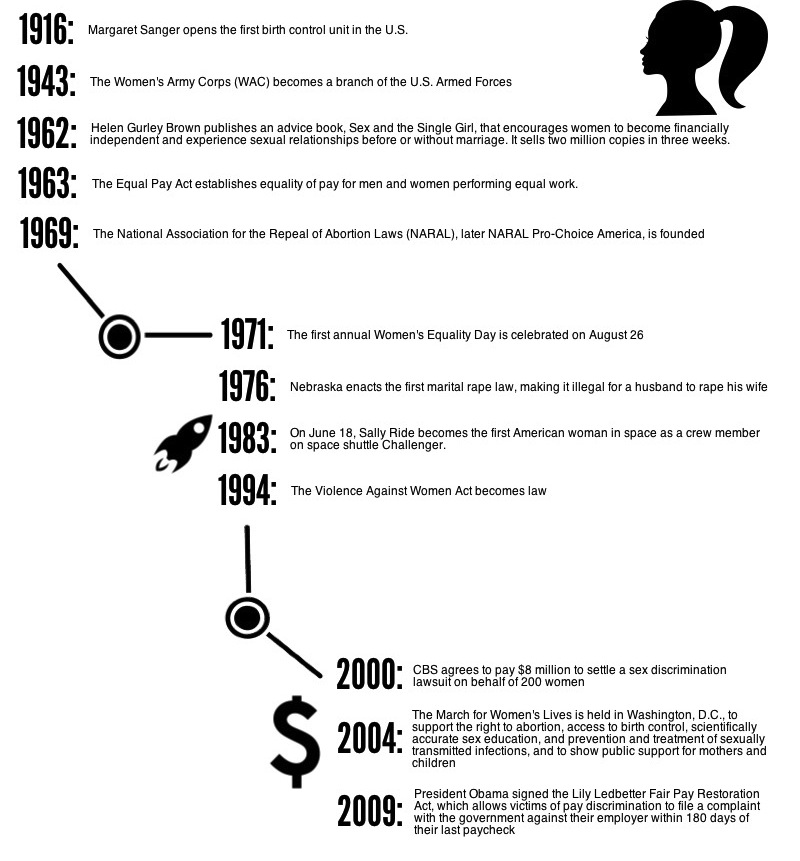 Gloria Steinem, considered one of the leaders of first-wave feminism, is living historical proof of the power of a woman who is focused and informed about what feminism can mean, and what it can accomplish. A leader of the Women’s Liberation Movement in the 1960s and 1970s, Steinem crafted her career through insightful writing and action, which pushed those around her to consider the very poignant issues she helped to bring to the forefront of the American conscience. One of Steinem’s defining moments came when she was actually employed as a Playboy Bunny at The Playboy Club in NYC. She published an article about how women were treated at the club, drawing attention to the demeaning nature of the work, and how exploited she felt as a woman hired to wear little clothing and be ogled at by men—some of the very things that Miley Cyrus and Katy Perry do on a regular basis, and claim as part and parcel of their “feminist” nature. The irresponsible way in which these pop-stars deploy the term (while acting in a contradictory manner) dilutes the significant work of a woman like Steinem, and stunts the growth of her cause… But, that doesn’t mean that there aren’t women in the entertainment world today working hard for women’s rights.

In terms of modern-day feminists, Mariska Hargitay is a wonderful example of a woman living in modern day society who is trying to make a difference involving modern day issues. The Joyful Heart Foundation, founded by the actress, is a community that works towards healing, educating and empowering survivors of sexual assault, domestic violence and child abuse. The foundation also aims to shed light into the darkness that surrounds these issues by releasing campaigns against sexual abuse. After Mariska began work on Law & Order: SVU, she found a deep desire to reach out to victims to let them know that they’re not alone. The actress and activist sets the bar for women to do great things.

And fear not, there are also pop-stars who are doing things right, and furthering the cause of women like Yoko and Gloria. Another positive example to look towards is the ever-enlightened Lorde. Lorde is humble and grounded, and one of the valuable things that she acknowledges is that feminism shouldn’t used as be a shock-factor or publicity stunt, for female artists to gain media attention, but rather a natural way of life in this day and age, she says; “I think I’m speaking for a bunch of girls when I say that the idea that feminism is completely natural and shouldn’t even be something that people find mildly surprising. …I find a lot of feminist reading quite confusing and that often there’s a set of rules, and people will be like, ‘Oh, this person isn’t a true feminist because they don’t embody this one thing,’ and I don’t know, often there is a lot of gray area that can be hard to navigate.”

At the end of the day, these issues remain extremely important, and although some in our cultural stratosphere may not yet grasp how to responsibly address them, there will always be strong and intelligent women to look towards help us all to put things in perspective.