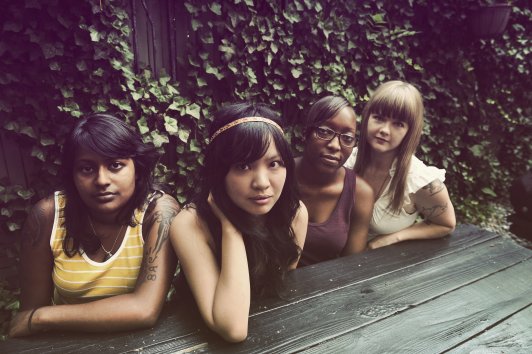 Heliotropes is the musical vehicle of four Brooklyn women that hail from places as wildly divergent as West Virginia, New Jersey, and California. The band formed in 2009 when vocalists Jessica Numsuwankijkul and Amber Myers posted an ad on Craigslist, seeking like-minded Brooklyn musicians to play Brian Eno covers with, and ultimately turned into a much heavier rock band, with “impressive range, shifting easily from vintage-girl group harmonies to rugged stoner rock powered by chugging riff-heavy guitars and banshee vocals,” [Rolling Stone].

In 2011, Heliotropes realized the release of their first 7″, “Ribbons“, followed by the digital releases of “Moonlite” and “The Dove,” offering heavy psych numbers steeped in dark magic and new-romantic leanings with a formidable lyrical presence.

So far in 2013, Heliotropes have recorded at Converse Rubber Tracks studio in Brooklyn, been featured prominently at SXSW as an official Red Bull Sound Select artist, and embarked on their first national tour of the United States with Esben and the Witch. The current lineup consists of Jessica Numsuwankijkul on lead guitar and vocals, Amber Myers on vocals and percussion, Cici Harrison on drums, and Nya Abudu on bass. A Constant Sea comes out on June 18th through Manimal Vinyl.