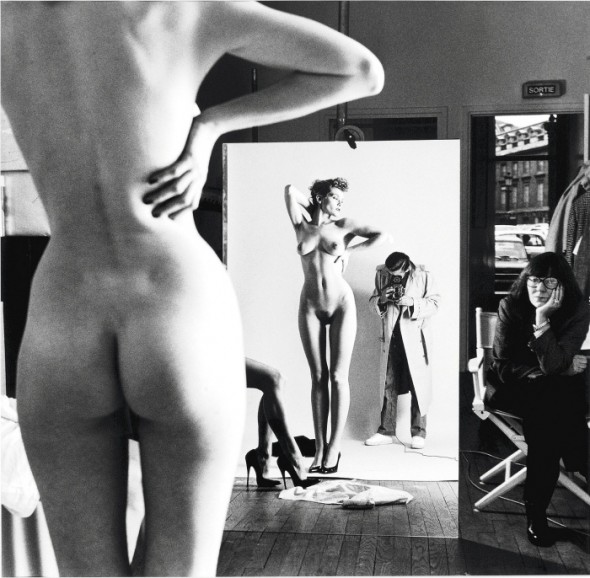 “Helmet Newton: 1920-2004” is on display at the Grand Palais in Paris, France from March 24th to June 17th, honoring one of fashion’s most important and influential masters of photography.  Since Newton’s death in 2004, there has been no retrospective of the German-Australian’s work in France, despite the fact that Paris was the location of some of Newton’s most iconic images, particularly his work for French Vogue, Elle, Playboy, and Harper’s Bazaar.  Newton’s wife, June Newton, aka Alice Springs, organized the exhibition, which features over two hundred photographs, mostly originals or vintage prints made under Newton’s supervision, shown side by side with quotations from Newton and a film by June, entitled “Helmut by June.”  The exhibition takes a look at Newton’s work in fashion during some of his most pivotal years in France, focusing on his provocative, iconic nudes, intimate portraits, and his unabashed, often humorous, approach to sexuality.  The retrospective also proves just how important Newton was to the world of art.  His work goes well beyond basic fashion photography; challenging the constraints of acceptability, the nude female form, and traditional photographic work in magazines from the sixties right up until his death.  The Grand Palais exhibition is the first of three up coming shows of Newton’s work, the next will be in Berlin featuring Newton’s Polaroids, followed by a show in Dallas which will include images from his three books, “White Women” (1976), “Sleepless Nights” (1978), and “Big Nudes” (1982).

–
Emily Kirkpatrick for The Untitled Magazine