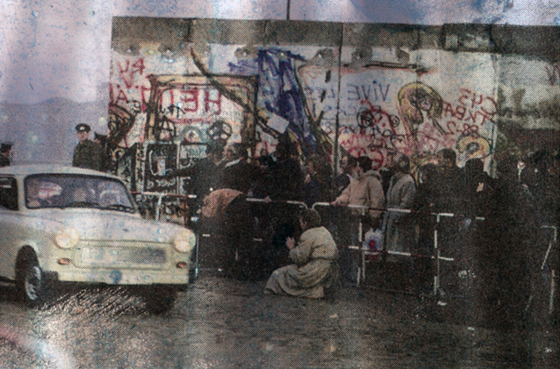 Jessica Silverman Gallery will present “Promises to Pay in Solid Substance,” a solo exhibition by Hugh Scott-Douglas, which includes three new bodies of work, respectively titled “Economist,” “Amazon.com,” and “Heavy Images,” as well as the artist’s “Screentones,” which are making their American debut. In addition to reflecting on authorship and economic systems, the four series are bound together by their exploration of the complex dynamics between the materiality of old-school images and the spectral-digital way that images circulate today.

The “Economist” series appropriates images from The Economist, an international magazine with no bylines and few explicitly credited photos. Scott-Douglas transferred the images through applying many layers of a clear acrylic gel to the printed page, then scanned the transparent transfers, enlarged them and baked the images onto wood panels using UV-curable ink. The “Economist” works are in line with the post-Warholian tradition of ready-made imagery, but they depart from standard tropes by paying homage to their media source and drawing attention to the portal through which the images previously flowed. The works are also in dialogue with the strand of contemporary art that examines global business. The thesis statement of this series (and largest piece in the show) depicts the Berlin Wall, that symbolic border between two economic structures – capitalism and communism.

The “Heavy Images” are sculptures made from large-scale expired billboard prints acquired online after they have served their commercial use. The images of various sizes – some as large as 20×48 feet – are folded and rolled as they were when shipped. Once weightless TIFF files, these objects now require significant infrastructure to circulate through the world. Billboards are a medium that arose alongside the automobile to target the driving viewer-consumer. While advertising in other media has suffered in the Internet age, street marketing persists, a dinosaur in the digital age. With their photographic content now obfuscated, these “Heavy Images” are like corpses after the soul has departed.

Scott-Douglas’s Brooklyn studio shares a hallway with an Amazon distribution center. Interested in the circulation of goods and ideas, the artist took blind snapshots of the retailer’s overflow in the communal hallway. The photographs are printed on textured styrene, enclosed in reversed black metal frames, and then displayed in their packing materials. The “Amazon.com” works are not photographs but wall sculptures whose forms mimic their content. In more ways than one, the works capture a transient moment in the interface of the digital sphere with the physical world.

First shown in Takashi Murakami’s exhibition space in Tokyo, the “Screentones” begin with letratone, an adhesive material developed by Letraset. Scott-Douglas removes the letratone sheet from its backing and applies it to multiple surfaces in his studio, sampling the dust and minute debris of his artistic practice. These transparencies are then enlarged with a negative scanner and printed onto wood panels with UV-curable ink. Straddling the divide between photographic and halftone prints, these monochromes evoke both minimalist and abstract expressionist painting through mechanical means.