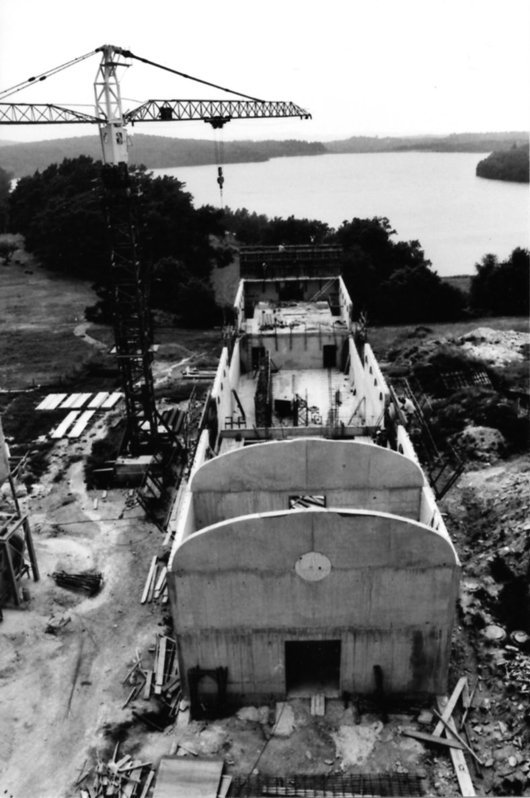 For his first solo exhibition in France, British artist Ian Kiaer is proposing a reinterpretation of the Centre International d’Art & du Paysage’s architecture, designed by Aldo Rossi and Xavier Fabre in 1986–88 and built on Vassivière Island in 1989–91.

In a group of new works all designed specifically for the centre, Kiaer reconsiders the visionary aspect of the building, drawing a parallel between the thinking of Aldo Rossi and the utopian projects of 18th-century architects like Étienne-Louis Boullée and Claude Nicolas Ledoux.

Challenging the predefined function initially allotted to each room in response to the different phases of the life of a work, the artist takes a fresh look at the relationships between research, creation and transmission, devising subtle installations that involve a mix of the archival and the found.

In the dim interior of the ‘Lighthouse’ we find a black and white projection of an Expressionist silhouette. Captured in real time by a CCTV camera, the image is that of a small architect’s model floating on the lake, inspired by Claude Nicolas Ledoux’s ‘Ideal House’ at Mauperthuis.

In the ‘Nave’ Kiaer strips the architectural context bare by detaching the fluorescent tubes – additions not planned by the architects – and letting them dangle along the wall. An enormous, transparent inflatable reversing the structure of the inner framework fills the space, while the solidity of the granite at ground level contrasts with the imprint of the wooden floor in Kiaer’s London studio, obtained by frottage on silver leaf. The work is rounded off by photographs and paintings referencing a mix of visionary architecture and vegetal motifs.

In the ‘Workshop’ Kiaer’s London studio makes itself felt again, mingled this time with slide projections of the building of the art centre. The ‘Study Room’, by contrast, is home to his most sculptural work, which uses everyday items in a harking-back to Claude Nicolas Ledoux’s spherical building.

The exhibition closes in the ‘Little Theatre’, whose character the artist underscores by unspooling rolls of paper like a curtain facing the rows of sets, and adding appropriate furniture, screens and other props.