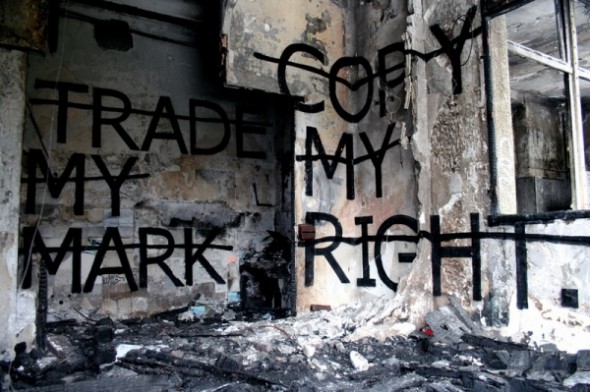 For the past 3 years, RERO has established his work through his innovative approach to street art. First introduced to the street as a teenage graffiti writer,  he eventually felt limited by a spray can and began exploring imagery through the use of typography. His work retains those values of graffiti- which remains at the very core- the confrontation, the aesthetics of destruction and the idea of appropriation. The forms of his letters, always in Verdana font, become the image. With his distinct visual style, RERO often inhabits disused and dilapidated spaces to explore the concept of “negation of the image”, presenting minimalist statements that combat our modern overdose on images and messages.

RERO challenges our understanding of intellectual property, images and computer terminology, through the use of words and phrases with a stark black line crossing them out. Using expressions such as “Trade My Mark”,  “Error 404” and “This Image is Free Copyright”, the artist seeks to provoke questions from the viewer to establish their own positions as to their meaning. The use of the strike-through furthers his exploration of negation, as it suggests a notion of denial or censorship.

RERO’s site-specific works enter the gallery space through a variety of media. His works on canvas emulate the abandoned walls where he often intervenes, where there is no distinctive brushstroke or human trace, instead marked by time and by texture. Similarly, he encases vintage leather bound books in resin, his way of making them “fossils” of the 21st century. For IMAGE NOT AVAILABLE , RERO will be exhibiting works on canvas, sculptures, works on paper and resin books alongside several installations.

RERO was born in 1983 and studied graphic design at London College of Communication. He has shown his work in numerous exhibitions and art fairs across Europe. He lives and works in Paris.

0
The Untitled Magazine August 6, 2012
No Comments Yet