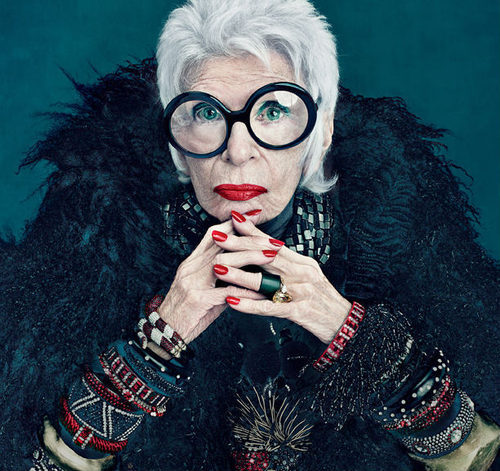 Iris Apfel, the ninety-year-old socialite and style icon, has decided to donate 600 items from her personal wardrobe to the Peabody Essex Museum in Salem, Massachusetts. The collection of clothing will include pieces from Alexander McQueen, Dior, and Karl Lagerfeld alongside Apfel’s trandmark flea market baubles and antique couture.  All 600 pieces in the collection were previously featured in the show Rare Bird of Fashion: The Irreverent Iris Apfel which was shown at the Metropolitan Museum of Art in 2005 and traveled to the Peabody Essex Museum in 2009. Besides the 600 garments from the previous show, Apfel, the self-titled “world’s oldest teenager,” has donated 80 to 90 pieces of clothing and jewels to the museum annually since 2010, rounding out the collection at around 900 pieces.  In the past, the Met expressed interest in purchasing the collection of Lanvin gowns, vintage Halston, and 19th-century haute couture, but Apfel was deeply impressed by the Peabody Essex museum and its staff and decided to bequeath her wardrobe to them, saying, “I think Peabody Essex is a fabulous place. Having dealt with a lot of art museums, I can tell you that I was very pleased with the way that it’s run. I think they’re quite cutting edge. This museum is much more cross-cultural than others I’ve worked with and mixes it up a bit.’’  Apfel and her husband, Carl, have also given an undisclosed amount of money to the museum, earmarked for a fashion gallery in a new wing of the museum set to open in 2017.  Iris Apfel’s wardrobe accumulates over 50 years of haute couture all under one roof and is sure to send more than one fashionable lady running out to Salem!