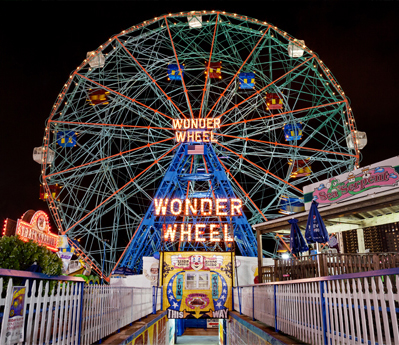 Following the widespread success ofJames and Karla Murray’s previous book Store Front – The Disappearing Face of New York, which received global acclaim for its documentation of the city’s iconic shop fronts, Gingko Press is pleased to announce the December 2012 publication of the Murrays’ New York Nights. A new chapter of the city’s cultural history is revealed in New York’s nighttime illumination — a city alive with excitement after dark.

With their 35 mm cameras at the ready, the Murrays explored all types of nighttime businesses. Establishments like Trash & Vaudeville, Apollo Theater, and many bars and taverns abound, but also included are restaurants and cafés, diners and bistros, drugstores and record shops, and of course Broadway theaters. These photographic portraits of New York life capture establishments that have survived decades, many with history going back to the nineteenth century.

Besides histories of the establishments, the book includes interviews with the businesses’ owners, who discuss personal struggles and ambitions, provide fascinating details about New York as experienced by their families, and regale us with stories of the bootlegging era – at speakeasies like White Horse Tavern, 21 Club, and Theatre 80 St. Marks. Famous New Yorkers are regular customers: Frank Sinatra and Ava Gardner secretly met at Rudy’s Bar & Grill in Hell’s Kitchen in the early 1950s, Dylan Thomas drank with the sailors and miners at White Horse Tavern, and Mark Twain filled his prescriptions at C.O. Bigelow Apothecaries.

Through these pages, we come to appreciate the glow of the neon era, and its symbolic grandeur at the birth of the modern American Dream. At night, these establishments are transformed as their facades are bathed in neon, and streets dreary by day become mini spectacles. The rich photographs that the Murrays share here are masterpieces of nightly luminescence.

New York Nights is a highly atmospheric street-level tour of New York — and a worthy homage to the city.

James and Karla Murray are professional photographers and authors. Their bestselling and critically acclaimed book Store Front: The Disappearing Face of New York as well as their graffiti publications Broken Windows, Burning New York, and Miami Graffiti have set the standard for urban documentation.