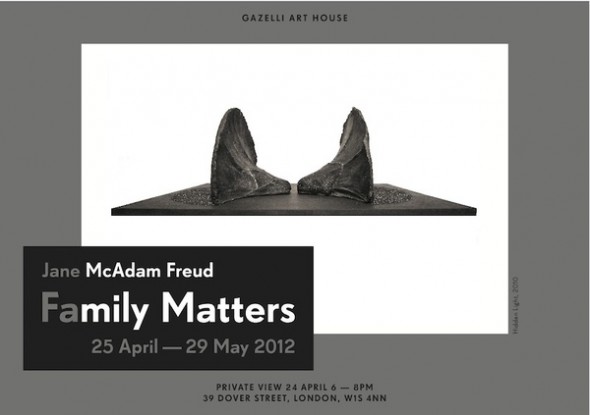 Fine artist Jane McAdam Freud will present her latest body of work entitled Family Matters in a solo exhibition at Gazelli Art House. From 24 April – 29 May 2012, McAdam Freud will display an array of personal sculptures and drawings that focus on her familial relationships and the broader concept of family at the new Dover Street gallery. Family Matters will show defining works in the artist’s career including new, previously unseen sculptures and installations.

The daughter of famed portrait artist Lucian Freud and great-granddaughter of groundbreaking psychologist Sigmund Freud, Jane McAdam Freud is highly influenced by her family history. Channelling her artistic heritage, McAdam Freud decided at an early age to pursue a career in art although it would not be until later in her life that father and daughter would work side by side when McAdam Freud taught Lucian Freud some sculpture techniques during her time at theRoyal Mint in South Wales.

Determined to find her creative niche within her family, McAdam Freud gravitated towards sculpture because it was a medium previously unexplored by her relatives. Although drawing has always underpinned her practice, sculpture remains McAdam Freud’s first love. Throughout her career, however, the artist has experimented with several mediums including carved and modelled relief, etching and digital media earning her awards and artist residencies in these respective fields. Acquired by museums around the world, McAdam Freud’s art is as beautiful as it is powerful with each piece relaying a narrative of the artist’s internal struggle with who she is and what her family name represents.

For the past 25 years, the artist has embraced the theories of Sigmund Freud, whilst incorporating her own interpretations into works. Regularly referencing themes of her great-grandfather’s psychoanalysis, she explores areas of morality, sexuality and the subconscious. Creating provocative, multi-layered and complex pieces, McAdam Freud often works intuitively so as to allow the engagement of her own subconscious. Family Matters will be McAdam Freud’s first solo exhibition at Gazelli Art House. The show will be a continuation from ‘Lucian Freud My Father’ at the Freud Museum, illustrating the artist’s further exploration into the theme of family relationships with a larger, more comprehensiveselection of works. More specifically, these new works are reflective of the artist’s engagement with the symbolic meaning of the materials she employs. McAdam Freud invites these materials and their connotations to take on universal meanings, for example, the artist’s common use of clay relates to the cycle of life and death; the act of creating a portrait of a loved one out of the earth from which both sitter and work will eventually return. As McAdam Freud explains, “Materially speaking we are all made from matter. Whether we consider the process of sculpture or the ethereal question of death itself, there is a powerful link between the works and their universal interconnecting themes”. Many of McAdam Freud’s works also incorporate mirrors in order to experiment with reflections and shadows, which represent the secret, often duplicitous inner world of the psyche, as explored by her great-grandfather.

Family Matters is a view into the artist’s private life through her portraits and sculptures that depict immediate family members and those that have made an impact on the artist’s life. Included in the exhibition is a large bronze portrait of McAdam Freud’s half sister, Annabel, as well as sculptures of her husband and children among others. For Gazelli Art House, McAdam Freud will also show a new installation entitled Home, which comprises a door belonging to a

good friend and neighbour of the artist who was a hoarder. This particular neighbour lived alone and never allowed anyone to come into her house. McAdam Freud was eventually let into the lady’s home and saw an array of piled objects – there was barely room to move. Passing away fairly recently, the last time McAdam Freud saw her she realised her friend, who was suffering from cancer, had become quite bitter. This led Freud to relate the physical aspect of hoarding with the desire to keep emotions inside. The door of the house and the key was retrieved by the artist as a memorial to her friend.

Further new, previously unseen works include a bust that comprises the faces of both Jane McAdam Freud and her father Lucian Freud. Now unable to sketch him from life, McAdam Freud will create an amalgamation of both artists’ faces, using herself as the model to emphasize their genetic similarities as well as their emotional and professional connections. The highlight of the exhibition will be the completed large-scale reliefs of the artist’s late father. Inspired by sketches McAdam Freud made of her father as he lay on his deathbed, the installation is a memorial to his life and artistic legacy. The completed works comprise the original EarthStone Triptych togetherwith Vassal, the shadow form (a new work). Divided equally into two separate parts, like a portmanteau, EarthStone Triptych is joined by a snake-like rim that brings the two halves together.