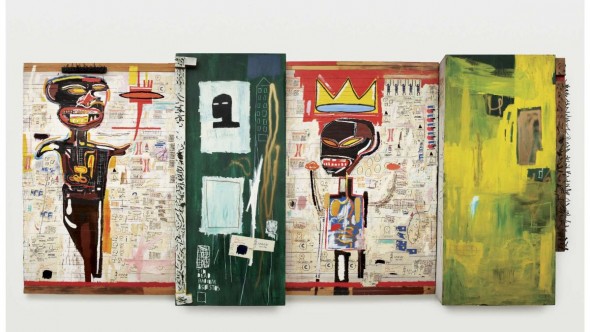 The Louis Vuitton Foundation in Paris is currently exhibiting the work of Graffiti artist, Jean-Michel Basquiat. The Contemporary collection is organized around contemplative subject, expressionism, and music/sound. This exhibit works around generations of artists and origins, shown from the ground floor and up. Part of the LVMH Group’s patronage of the arts and culture, the Louis Vuitton Foundation was built and completed by architect Frank Gehry in 2014.

Jean-Michel Basquiat is one of the most notable figures in graffiti art. He was famous for his participation in the group, SAMO, a graffiti tag that gained popularity in the Lower East Side, New York from 1977-early 1980. Starting in the early 1980s, he was exhibiting his primitive, neo-expressionist art in galleries and museums internationally. He incorporated mixed media into conveying subjects such as poverty, integration versus segregation, & inner versus outer experience. Despite a short life with his death at age 28, he left a legacy on the contemporary art and street art world.