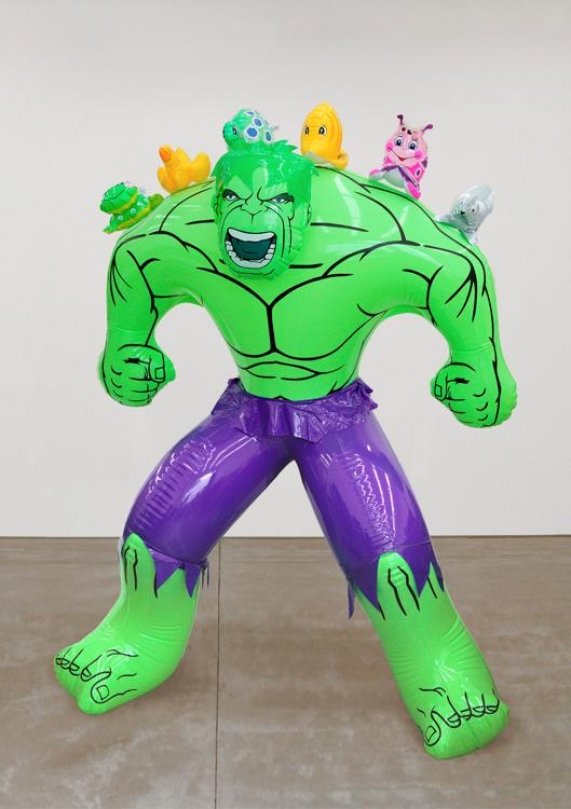 JEFF KOONS: HUMANKIND BEFORE ALL

OPEN TO THE PUBLIC OCTOBER 9 – NOVEMBER 17

Jeff Koons has had a busy summer. A troika of career-reaffirming exhibitions have just been taking place throughout Europe : the Fondation Beyeler in Basel has produced a retrospective of his works centered around three principal groups of works (“New,” “Banality,” and “Celebration”); the Schirn Kunsthalle and the Liebieghaus Skulpturensammlung, both in Frankfurt, have been focusing on the two major arteries of Koons’ artistic production : his painting, and his sculpture, exhibited simultaneously, but in two separate Frankfurt venues. The latter venue, the Liebighaus, hosts an exceptional collection spanning five millennia of sculptures of the highest rank and quality. Koons’s works were seen there, creating an astounding set of dialogues, anchoring his own practice at the heart of a climactic tradition of sculpture – (one of the high points of these dialogues (or duets) was the close and intimate juxtaposition between the artist’s Woman in a Tub, and a monumental altarpiece by Della Robbia Assumption of the Virgin (“Madonna della Cintola”.)

Now, another impressive exhibition of Jeff Koons’ art is about to open : at Almine Rech Gallery in Brussels. This is an event for many reasons: this is the first Koons exhibition in Brussels since 1992, when Made in Heaven was revealed to the Belgian public. More importantly, the present exhibition crowns this summer’s harvest : it concludes, recaps, but also expands again, on this extraordinarily rich and fecund season of exhibitions in Koons’ oeuvre.

Neither Koons nor his art can ever stay static : his oeuvre is like a quivering organism, ceaselessly buzzing with life, producing ever new and more surprising, vivid forms. At Almine Rech Gallery, Jeff Koons is presenting a selection of seventeen works from the past two decades of his production ; recent, and less recent works will be brought in together with brand new works : works from the Celebration (1994-), Popeye (2002-), and Hulk Elvis(2005-) series, will be seen with a few works never yet seen in public, such as a pair of paintings from the artist’s latest series Antiquity (2009-). There will also be new works or hybrid works that combine elements from these past various groups. In many ways, then, this exhibition at Almine Rech offers a crisp and precise selection and a summary of some of the iconic paintings and sculptures that have come out of Koons’s studio, and, at the same time, it introduces a ‘ne w, new, new’ Jeff Koons – one who, ironically, looks towards the dawn of humankind : the exhibition offers us a juncture between past, present and future, but also enables us to penetrate deeper within Koons’s ever more fascinating, and effervescent universe.

Much has been said lately about Koons’s interest in, and indeed, vast knowledge of, art history : Koons tends to be presented as a prodigy son, and grandson of Warhol, Duchamp (namely through his shared fascination for the ready-made), and Michelangelo. One readily forgets that Koons’s interest and engagement in art history is but a special mode of access in order to achieve something he has never stopped emphasizing : his interest in mankind – and indeed, his deep-seated intent to communicate with the rest of humankind. As he once put it to Peter-Klaus Schuster, “I enjoy art, and I feel connected through human history.” Koons means it. Through art beats the pulse of humanity : Jeff Koons celebrates this aesthetic beat, at all levels possible, in every part of our existences. This is why, to Jeff Koons, beauty is synonymous with “acceptance” : literally, the acceptance that every emotion in front of beauty is worth celebrating – whether it be the excited am azement of a child’s glittering eyes in front of his first inflatable toy, or whether it be the awe-inspired devotion that one imagines in the eyes of our earliest forebears, 27,000 years ago, in front of the Venus of Willendorf (a recent topic of inspiration for Koons.)

But, starting back with Celebration (on view at Almine Rech Gallery), this is a series that, for Koons, was already, precisely, about communication. The works – diamonds, balloon animals, hearts rendered in steels of glowing hues as well as paintings of similar objects – sprang from a desire to connect with his son – and via his son, through mankind, at large. Beginning in 1994, Koons devoted himself to creating these fantastic images, which he has referred to as new archetypes for contemporary mankind. Thus, these images serve to unite viewers – we can see ourselves figuratively, in these wonderful objects from our collective childhood, and literally, mirrored in the sleek steel surface.

The Popeye series, begun in 2002, employs the same vocabulary of children’s toys asCelebration but expands these references, harkening back to his Pop predecessors – through Koons’s own Pop Eye. As Warhol did before him, Koons uses Popeye as an American hero, an instantly recognizable everyman deeply rooted in popular consciousness. Koons also further explores the realm of the Duchampian readymade, casting inflatables – except, of course, that there is nothing ‘ready made’ in any of Koons’s sculptures : quite the opposite, everything is ‘ultra-made’. The lobsters Koons features in this series also remind us of Dalí. Indeed, here, the configurations, juxtapositions, and combinations of sculptural or pictorial elements confer an ironic and surreal touch to these compositions.

The Hulk Elvis series, begun in 2005, centered on this incredible green superhero, links East and West. Says Koons, “For me, the Hulk is functioning globally. It’s representing not only a Western action figure but also an Asian guardian god.” The sculptures of Hulk Elvis take up monumental space, with their fierce, pugilistic presence: cannons, cannonballs, and, of course, the scary Hulk himself. The paintings are complex layers of intricate imagery, often challenging for the eye to untangle. Along with images of steam engines, geishas, inflatable monkeys, Hulks, there are layers of seemingly impressionistic (but rendered in Koons’s exacting method) brush strokes, sexual imagery executed with a dot matrix, and childlike scribbles, like a popular “Origin of the World by Twombly” drawing, as Koons has referred to it. These layers produce a feast for the eyes, at once instantly recognizable and yet impossible to fully comprehend.

Antiquity is Koons’s most recent series, and links the artist with the oldest forms of art : this is his grandest statement yet on his long-standing exploration of human/art history. Paintings from Antiquity, on display at Almine Rech Gallery, bring to life this notion of acceptance and celebration of all aesthetic emotions : these works display visual collages of disparate references spread on top of each other on several picture planes, tying together various strata of artistic sophistication. The very recent Antiquity (Farnese Bull) (2010-2012), for instance, includes representations of works by unknown street artists, a childlike scribble, a painting by one of Koons’s (and Duchamp’s) personal hero, Louis Eilshemius, as well as some of the greatest works from classical antiquity. The titular Farnese Bull occupies the center of the painting; this large sculptural group, unearthed in the sixteenth century during excavations by Pop e Paul III, is flanked by a bronze Priapus and an Aphrodite. On the foreground of the image is an antiquity Celtic idol, known as the Raglan Carving, that Koons acquired for his own collection. Finally, hovering upon all these layers, is a childlike drawing of a sailboat that doubles as an erotic visual double entendre.

From the same ANTIQUITY series, Metallic Venus (2010-2012), an awe-inspiring sculpture holding fresh flowers, constitutes a true tour de force and an act of departure within the artist’s sculptural oeuvre. This sculpture draws upon the colored stainless steel Celebrationworks, while also looking back at Praxiteles, the renown Attic sculptor of the 4th century B.C. who revolutionized the tradition of depiction Aphrodite, by depicting her (in a strangely modern way) as a woman about to have a bath, rather than a deity frozen in her nudity. Koons uses her new techniques of manufacturing to produce a liquid finish in which the steel appears to be melting before our eyes, suggesting the very liquid vessel out of which Venus/Aphrodite was born. Venus/Aphrodite is lifting her dress above her head, exposing the origin of her sexual power and a perfectly callipygian rear – all refer back to the beginning or “The Origin” of the world : beside her are live flowers. Koons has worked with flowers before, in his oversized Puppy and Split-Rocker sculptures. Here the flowers represent the blossoming of sexuality as well as make a statement about the universality of eros: though flowers usually take on transient qualities associated with death, here, constantly tended to and replaced, they are in a permanent state of tumescence.

Human history transcends art history – this is what Jeff Koons, one of the greatest living artists today, teaches us: art only serves to make us become more aware of ourselves as human, as part of humanity – and as part of our co-humanity. A message whose impact today could not be more welcome!