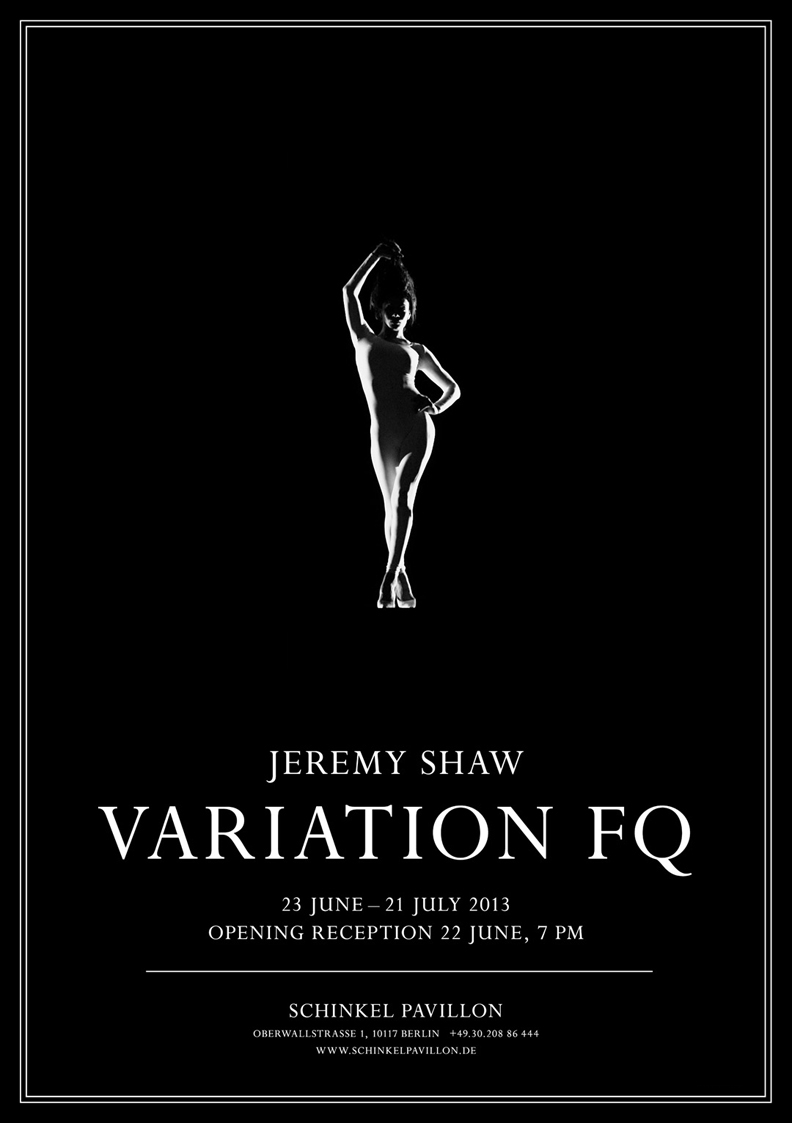 In the exhibition Variation FQ, Jeremy Shaw will premiere his latest work – a 16mm film that places the transgender vogue dancer, Leiomy Maldonado, within the aesthetics of Norman McLaren’s 1968 ballet film, “Pas de deux”. Presented at Schinkel Pavillon, Variation FQ (11:05 Min) seduces and confronts the viewer with the beguiling force of Leiomy Maldonado highly dramatic and evolved voguing performance. Using high contrast black and white, step-and-repeat effects, and an original soundtrack composed by Shaw himself, the film amplifies and extends the unique, cathartic movements the protagonist’s dance, both graceful and violent.

Voguing is a primarily Afro-american and Latino, gay dance subculture that began in New York in the late 1960’s, and in spite of minor mainstream recognition, remains largely marginalized. Variation FQ is a study of the co-evolution of subculture, gender, dance, and special effects.

A program of evening events including screenings and a talk with Marc Glöde will accompany the exhibition, introducing various visual and social elements that are touched upon by Shaw’s film; some didactic, others quite obscure. The accompanying program aims to serve as a platform for continued discourse around the exhibition as well as an invitation to the backstage thinking of Jeremy Shaw.

Jeremy Shaw (*1977 Vancouver) is a Canadian artist based in Berlin. He works in a variety of media ranging from film and video installation to performance and sculpture. Jeremy Shaw’s work explores altered states of consciousness and the cultural and scientific practices that aspire to, or attempt to map, transcendental experience. Often involving the documentation of physical and ritualistic activities of subculture, his videos, photographs, and installations offer propositions around the translation of experiences often considered untranslatable. Shaw’s work has explicitly combined strategies and devices of conceptual art, documentary film, music video, and scientific research, to address topics ranging from psychedelic drug use, brain imaging and hypnosis, to straight-edge hardcore, time-travel, and rave culture.