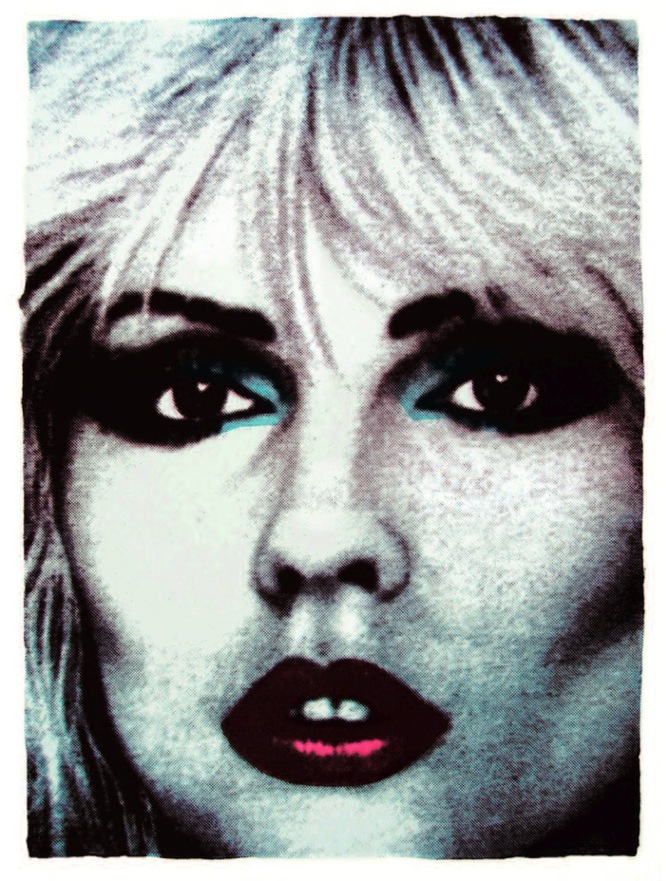 Paul Stolper Gallery is proud to announce ‘Face to Face’, an exhibition of drawings, prints, collages and textiles by British artists John Dove and Molly White. The pair’s first solo exhibition at the gallery includes artwork from 1968 to the present, and will include some of their seminal original T-shirts as a background to the more recent works on paper. It will consist of a small selection of collages and drawings from 1966-1986, and a group of recent prints on paper, including a selection from the series of ‘Face’, ‘Rebel’ and ‘TV’ prints. Also included will be more recent works on paper, ‘Twins’, ‘The Paradox of Truth’ and the ‘Smile Hair’ prints.

John Dove, an artist and illustrator who taught drawing at Sutton School of Art in 1965, and Molly White, a textile designer who was also teaching Printed Textiles at Berkshire College of Art, made a career in fashion that instigated the fusion and convergence of music, fashion, art and graphics. Their art was forged on the same silkscreen machines that artists were making prints on; they were inventing print technology not to make small editions to be framed, but to make editions in the thousands for people to wear on the street, at the time their ‘prints’ were made for t-shirts not canvas or paper. They wanted their work to be democratic and affordable and therefore have the potential to reach a global audience. Dove had already understood and investigated the concept of the unlimited multiple, having fabricated his ‘Liberty Souvenir’ edition for Tommy Roberts’ shop Mr Freedom, and his unlimited ‘Flying Ducks’ multiple, 1970, which was included in the exhibition of Multiple Art called ‘3 To Infinity’ at The Whitechapel Gallery, London. Dove and White had already conceived their Cut ‘n’ Sew ‘Strawberry kit’ multiple in 1968, later made famous when Paul McCartney wore it on the Wings Tour, 1973, and carried by Fiorucci and Camomilla, Rome.

This ‘convergence culture’ allowed them to find an alternative outlet for their visual language, a popular art, that was not confined purely to routes laid out by the art colleges. In 1968 John & Molly moved into a large derelict factory in Paddington, London where they built a screen printing unit and a sculpture workshop, Molly successfully designing fabrics that sold at Liberty’s and Mr. Fish, and John concentrating on his own drawings that were also selling well. The ‘Painless Tattoo Collection’, 1968, (subsequently bought by Bloomingdales, New York), an early collaboration, involved printing tattoos on translucent fabrics, cemented their working partnership and persuaded them to set up a company ‘Wonder Workshop’ in 1972, out of which came such seminal T-shirts as ‘Stupid Cupid’, ‘Wild Thing’, ‘Silver Surfer’, ‘Gold Elvis, ‘My Baby Loves the Western Movies’, and the ‘Blonde Bomber’ series, many of which were included in the Victoria & Albert Museum exhibition ‘The Fabric of Pop’ in 1974, the first of its kind. America, Pop Art, Dada, Surrealism and Rock ‘n Roll were a huge influence, and meant that Dove and White could offer American glamour both through their use of visual subject matter but also through their innovative printing techniques using diamante, gold inks, glitter, and rhinestones.

Since there was no precedent to what they were making they were free of any preconceived notions of what and how to make clothes, which gave them complete freedom to experiment.

The spontaneous medium of printing t-shirts allowed Dove and White to comment and respond quickly to contemporary news and events, and to reach a much larger audience than any art gallery could provide, with ‘Exploding Mickey’, 1975, being the perfect example, where America, as represented by Mickey Mouse the face of Disney, now just another corporate global monster, with wild acid-warped eyes, and head ripped apart by missiles, highlights their disappointment in an America as world bully not only domestically in their treatment of the American Indians but also of their continued presence on Vietnam. The American dream turned rotten. And yet three years earlier, in 1972, the fuse that would ignite punk rock on both sides of the Atlantic had been lit, musically on ‘Raw Power’ by the Stooges, and visually by Dove and White’s legendary leatherette jacket as worn by Iggy Pop on the back cover, with
an image of a snarling growling leopard head.

If bands such as the New York Dolls, Johnny Thunders and The Heartbreakers, Blondie, and The Sex Pistols defined Punk music, Dove and White were visual counterparts. Inside their ‘Wild Thing’ jacket, Dove and White had printed a garish green leopard print lining as an anti-fur trade protest, based on a 1968 Molly designed black and white zebra stripe furnishing textile. The stripe in garish colours became a punk and post-punk defining design. In 1976 they opened a shop, ‘KITSCH-22’, and by 1977 their own label Modzart, which launched their ‘Face’ and ‘Rebel’ series, the latter the fashion equivalent of their favourite Top 10, not songs but revered heroes.

Whilst Dove and White became more and more successful in the commercial fashion world, selling internationally particularly well in Japan, they always pursued their own vision, rather than letting what was fashionable dictate to them. They have been included in many museum shows including The Whitechapel, The ICA, The Victoria and Albert Museum, ‘Snap, Crackle & Pop’ 2012 at The Lightbox Museum and most recently ‘Pop Design Culture Fashion’, 2012, Fashion and Textile Museum, London.

“The T-shirt is a socialist revolution born out of a product of the capitalist modern world. The T-shirt belongs to everyone – part of a universal language – more personal than a Pop poster, more poignant than a song – from it’s humble beginnings in the novelty genre through the Pop and the Literary to the Illusionary and the Surreal” John Dove and Molly White 2011.