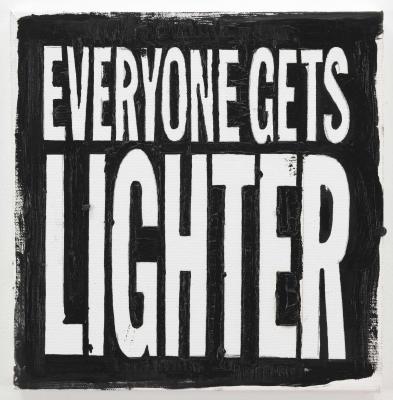 New York based, John Giorno is considered to be one of the pioneers of Performance Poetry. With a career spanning over 50 years, many influential figures of the contemporary art world, as far as the 1960s rank of writers and artists, hold close ties with the poet. After love affairs with Andy Warhol (he is famously known as the subject in Warhol’s experimental 1963 film Sleep), Robert Rauschenberg, and Jasper Jones – it describes why Giorno intended to work closely with visual artists rather than maintaining close quarters with other artists. With heavily pop art companions, it’s no wonder why Giorno seeked out visual media with his ensuing works.

Giorno saw the outdated tactics of the poetry world and sought to recondition the form of art itself. Truth be told, poetry is relatively obsolete compared the timeline of innovation with painting, sculpture, dance and music.

Max Wigram Gallery is presenting the first one-person exhibition in the UK  “EVERYONE GETS LIGHTER”. It was in 1965, where Giorno founded the artist collective and record label, Giorno Poetry Systems. It spearheaded multimedia poetry, releasing videos of live performances, and with over 50 LPs and CDs for the art genre. Such performances included William Burroughs, John Ashbery, Patti Smith, Philip Glass, and Laurie Anderson. Another innovative tactic, Giorno brought into light around 1968, was a communication experiment called Dial-A-Poem. It allowed callers to dial a number and experience a live poetry performance through a recording. With these ingenious maneuvers, it riveted succeeding poetic movements such as Spoken Word and Slam Poetry.

The exhibit includes twenty-four watercolor Poem Paintings, a staged performance, and the iconic Dial-A-Poem. In Poem Paintings, he allows the paintings to become a vehicle for poetry. A poetic narrative is set in motion purely by visual means. Dial-A-Poem allows for individual artists, authors, musicians to read aloud their works, bringing forward over two hundred works within the collection. The bevy includes friends and colleagues of Giorno – Charles Bukowski, William Burroughs, John Cage, and Allen Ginsberg. This part of the exhibit allows for in person relish or online.

Being the prolific performer he is since the 1960s, he has several poetry collections including Subduing Demons in America: Selected Poems, 1962-2007. Giorno’s work is part of important public collections, including Centre Georges Pompidou, Paris; Musée National d’Art Moderne, Paris; MUDAM, Musée d’Art Moderne Grand-Duc Jean, Luxembourg; MoMA, Museum of Modern Art, New York. Giorno will be the subject of a major retrospective of his life and work at Palais

FRENCH ASSOCIATION AT ODDS WITH KARL LAGERFELD OVER "FAT" COMMENTS