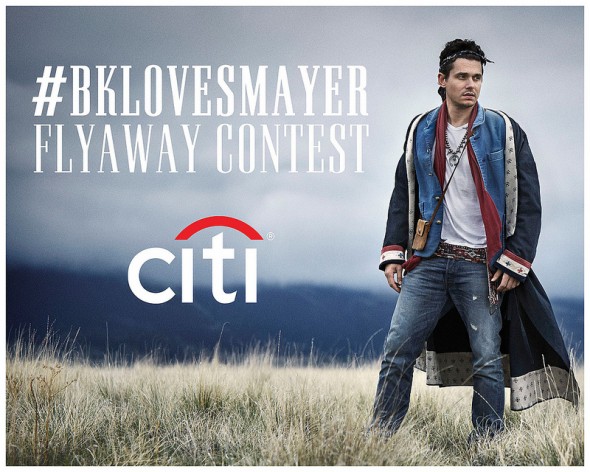 John Mayer announced a social media photo contest with Billboard magazine via his Instagram account (@johnmayer) in support of his partnership with Citi for his upcoming 2013 Fall tour. Inspired by his latest single, “Who You Love”, fans can enter to win a flyway trip to meet the Grammy® Award-winning artist and attend his show at the Barclays Center in Brooklyn, New York on December 17, 2013.

John Mayer fans can enter to win by telling their own story of who or what they love by posting an Instagram image of that person or thing with the hashtag #BKLovesMayer. The contest will run from November 7 – November 26 with Mayer choosing the winning Instagram photo early December.

John Mayer recently released his sixth studio album, Paradise Valley, co-produced with longtime collaborator Don Was. Collectively, Mayer’s albums-Room for Squares, Heavier Things, Continuum, live album Where the Light Is, Battle Studies and Born and Raised, and Paradise Valley-have sold over 20 million copies worldwide. During his career, Mayer has garnered seven Grammy® Awards and eleven nominations, and he was honored in Washington, D.C. by the Recording Academy for his philanthropic work on behalf of both U.S. military veterans and young people interested in music. Additionally, he has been included in Time Magazine’s annual Time 100 list of the most influential contemporary thinkers, leaders, artists and entertainers, and twice been featured on the cover of Rolling Stone Magazine’s annual Guitar issue. A musician who confounds genre boundaries, John Mayer has performed and/or recorded with a range of artists from the worlds of rock, blues, hip-hop, jazz, and country.

Instructions and Official Rules for both the contest and sweepstakes can be found here.