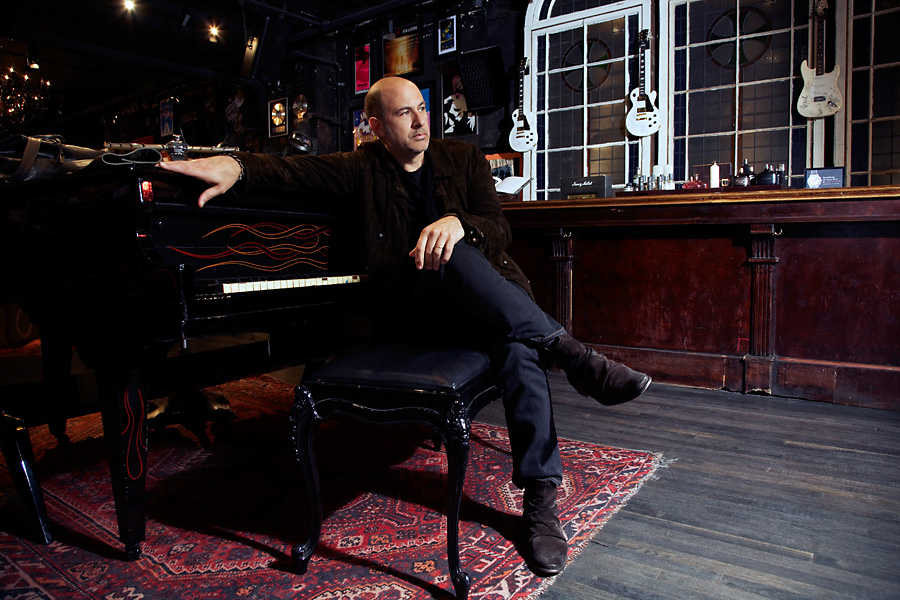 Iconic menswear designer and rock ‘n’ roll enthusiast John Varvatos celebrated the 5th Anniversary of his New York boutique in April, located at the infamous CBGB’s in Manhattan’s lower east side. Known for his “obsession” with rock music and extensive collaborations with musicians, it is more than a fitting location for the brand. He is known to not only incorporate aspects of the rock ethos into his distinct aesthetic, but to credit it as the catalyst for his interest in fashion. Over the years he has thrown countless performances at the legendary former rock venue, and he has featured music legends including Iggy Pop, Alice Cooper, Velvet Revolver, Chris Cornell, Dave Matthews, The Roots, and Green Day into his campaigns, which are shot by rock photographer Danny Clinch.These timeless images showcase each artist’s unique style as well as highlights of Varvatos’ collection in equal measure. Varvatos is active in music-philanthropy circles, incorporating various social causes into his brand through his work with Save The Music Foundation and The Annual Stuart House Benefit. Through these endeavours, both artistically and altruistically, Varvatos’ name has become synonymous with the rock ‘n’ roll lifestyle. For this issue, Editor in Chief Indira Cesarine sat down for a one-on-one with the fashion behemoth to talk about his life-long fascination with the world of music, his upcoming projects and his newest ad campaign shot with the legendary Jimmy Page alongside rising R&B-blues star, Gary Clark Jr.

Indira Cesarine: Out of all the designers out there, you’re probably the most involved with the music industry. How has music impacted you as a designer?

John Varvatos: I think it was kind of an organic thing that happened. I was not only interested in music, passionate, obsessed about it from the time I was a young kid, but I also was very into the way people dressed.

IC: You previously worked with Calvin Klein and Ralph Lauren, but you weren’t really working with musicians. Was it after you launched your own brand that you were able to do that?

JV: When we launched our own brand in 2000, it was really artists coming to me liking the clothes. And it intrigued me, because I didn’t really do it as a rock ‘n’ roll collection. What became quite a big part of my client list were artists that had come to us whether it was for events like the Grammys or tours. Then, in 2005, I decided to incorporate what I considered iconic artists into my ad campaigns, which really kind of changed the whole dynamic of the brand. 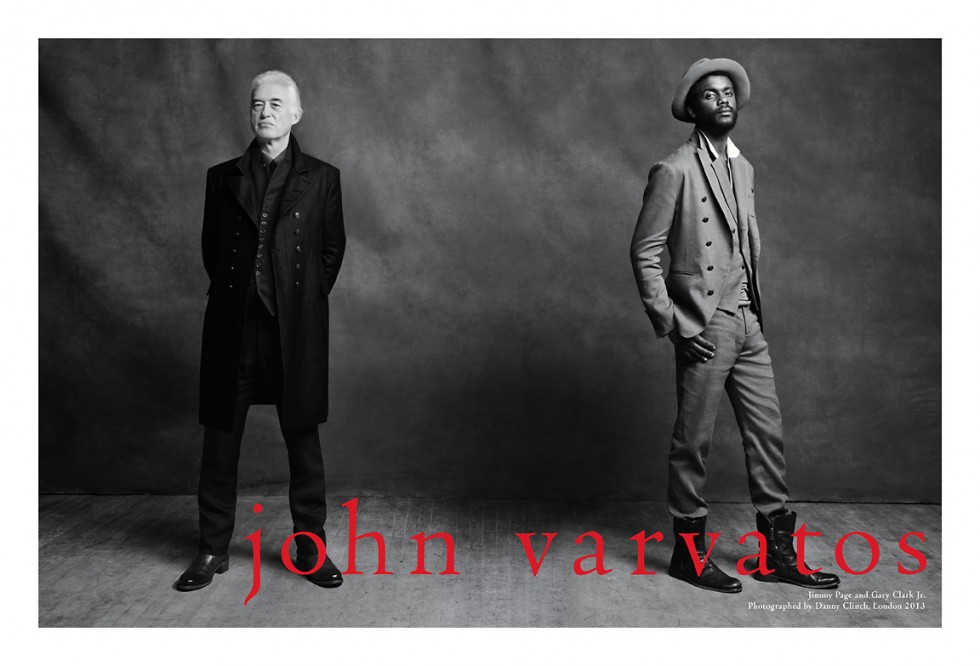 IC: Do you have a particular collaboration that stands out?

JV: The present one, with Jimmy Page and Gary Clark Jr., is really a life’s dream; Jimmy Page is one of my biggest music and fashion icons when I was growing up, and to have him in my campaign today, and also with Gary, who is one of the hottest rock-blues musicians on the planet right now—the two together, kind of the “master and the young gun” idea—was really pretty special. Iggy Pop was unbelievable. I grew up in Detroit, and growing up with Iggy and the Stooges were kind of my Detroit heroes. Each [band] has its own special part in our history. And nobody does it for the money. We pay very little for the campaign. It’s so flattering. As a fan, it’s one of those things where you just pinch yourself. When you have these artists in your campaign, and they’re as excited about doing the campaign as you are about shooting them, it’s pretty special. I feel quite blessed that they respect [me] and the brand, and that they want to collaborate, and not because of some big marketing budget.

IC: How long have you been working with Danny Clinch?

JV: We shot our first iconic music campaign in 2005. Danny’s shot all 17 of those campaigns. He’s one of these photographers who just captures things in the moment. He has a huge respect for the artist. He knows most of the artists that we’ve shot. They have a respect for his work and his credibility.

IC: Can you tell me about your New York location at the former CBGB’s?

JV: It’s five years in April that we’ll be there. It was one of those things that just came up by a fluke. CB’s had been closed for over two years when I happened to be in the neighborhood. I was looking at the space, and how what was once so beautiful at that moment had been destroyed and everything torn out of there. There was something that inspired me to keep live music going in the Bowery. We don’t purport at all to be CBGB’s, but we’ve had over hundred live artists perform on that stage over the last five years. We are throwing a five-year anniversary there in April. You know, the whole idea is to give back to the neighborhood. It’s special, keeping the music alive in the Bowery.

IC: Axel Rose did a surprise set there, is that right?

JV: Yes – we didn’t know if they’d show up or not! They were supposed to play four to five songs, and they played 18 songs in two-plus hours. It was one of those magical nights that sometimes happens in music.

IC: You collaborate with foundations such as the VH1 Save the Music Foundation. Can you tell me a little bit about that?

IC: What about your collaboration with the McIntosh Library?

JV: Yeah, we’ve done a lot of different things with McIntosh. We’ve done a listening party on the West Coast with Jane’s Addiction, a special event in NYC with Tony Visconti, who produced David Bowie and T-Rex. My whole thing about music is…exposing people to great music. Some are young up-and-coming artists that you just want to help get out there and help get on tour, and other are artists that you kind of re-expose people to.

JV: When you design for a runway, there’s gonna be the opinion of the people in the audience and the press, and when you work with musicians, they’ll have an opinion as well. I think you get more back at times from working with musicians because there’s a huge passion that you feel immediately, both for your clothes and the music around it.

IC: Do you have a motto or words of wisdom that you live by?

JV: Number one, “passion” is the most important word in your life. There’s a Rolling Stones song that says that ‘you can’t always get what you want, but if you try sometime, you’ll get what you need.’ To me, you can be as passionate as you want about everything, but in the end, if you get what you need, there’s something pretty special about it.

IC: What are the upcoming projects with Varvatos in 2013, aside from your 5 Year Anniversary?

JV: In March, we have our ten-year anniversary of the Stuart House Benefit, raising awareness and money for sexually abused children. We’re proud to say that we’re their largest contributor on an annual basis. This year I hope to raise a million dollars on a Sunday afternoon. We had Steven Tyler and Joe Perry from Aerosmith playing; every year it’s a music extravaganza as well, with about 1700 people attending.

IC: And you have a TV show as well at the moment?

JV: Fashion Stars, second season on NBC, airs Friday at 8PM. It’s a competition for aspiring designers. My role on the show is a mentor, not a judge, and I will work with the designers to help guide them through the competition. The judges are Macy’s, Saks Fifth Avenue and Express, and the host is Louise Roe. One of the interesting things about the show is that the night that we have that competition, if the clothes are bought – and a lot of the clothes are bought by those three stores – you can buy those clothes online that night or the next day in the store, which is kind of instant gratification.

IC: That’s amazing to be a mentor to such creative talent. Did you ever have a mentor yourself?

JV: I was lucky enough to some degree that Ralph Lauren was my mentor. Probably not as hands-on, but I worked very closely with him for a number of years, and I still view him as my mentor.

IC: Well that’s not too bad of a mentor.

JV: It doesn’t get any better than that!

– Interview by Indira Cesarine for The Untitled Magazine “Music” Issue 6