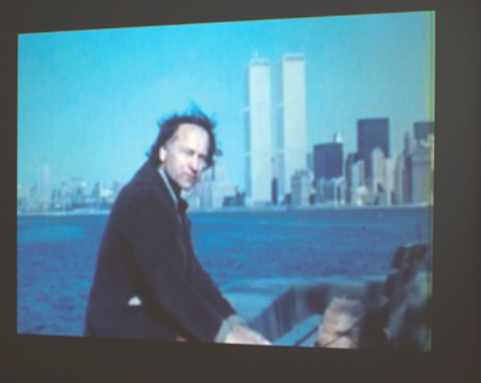 James Fuentes presented a solo presentation at the inaugural NADA Cologne by Jonas Mekas (Born, Semeniškiai, Lithuania, 1922, Lives and Works in New York).  A single monitor work entitled “World Trade Center Haikus”, 2010, and four monitor work entitled “Destruction Quartet”, 2009 were presented. The Destruction Quartet features four simultaneously running yet unsynchronized films that bring together fragments of symbolic and real acts of destruction. The videos consist of footage from the demolition of the Berlin Wall in 1990, Danius Kesminas’ 1991 fire sculpture, (New York) Consequence, a 1997 Nam June Paik performance in which Paik wrecks a piano, and the 2001 destruction of the World Trade Center filmed from the roof of Mekas’ SoHo apartment building.

The artist writes about World Trade Center Haikus; “Looking through my finished and unfinished films, I was surprised how many glimpses of the World Trade Center I caught during my life in SoHo. I had a feeling I was Hokusai glimpsing Mount Fuji. Only that it was the World Trade Center. The WTC was an inseparable part of my and my family’s life during my SoHo period from 1975-1995. This installation is my love poem to it. My method in constructing this piece was simply to pull out images of the WTC from my original footage, while including some of the surrounding scenes. The result I felt came close, albeit indirectly, to what in poetry isknown as the Haiku.”

Since 2000, Mekas has expanded his work into the area of film and video installations, exhibiting at the Musée d’Art moderne de la Ville (Paris), the Moderna Museet (Stockholm), MoMA PS1 (New York), Documenta Kassel), the Museum Ludwig (Cologne), and the Venice Biennale. In 2007, the Jonas Mekas Center for theVisual Arts opened in Vilnius, Lithuania.