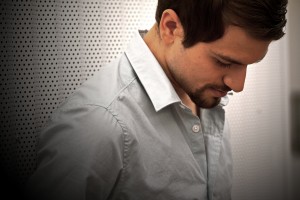 Joshua Kwassman’s Songs of the Brother Spirit serves as a shining display of inventive musical storytelling.

The themes of brotherhood and growing up drive Songs of the Brother Spirit (Releasing today, March 12, 2013). Eight biographical pieces grow and develop, toeing the line between nostalgia and burgeoning adulthood. The main story is about his longtime friend Justin, someone whom Kwassman idolized and followed through his youth. In August 2010, a bike-trip turned

into chaos and shattered his youthful illusions. While that trip itself found Kwassman growing up in a hurry, his musical recounting of the experience marks the debut of a remarkably mature young composer. Kwassman conveys this autobiographical account through lush, modernist arrangements that suggest an ensemble much larger and more varied than its six pieces.

Songs of the Brother Spirit evidences a gift for vivid communication and transporting emotional colors. As Kwassman succinctly says, “My goal is always to tell a story… It’s a connection, not based on blood or obligation but on love. Each piece of music comes out of that place. This album is just the beginning for me, because I’m still learning from that spirit.”