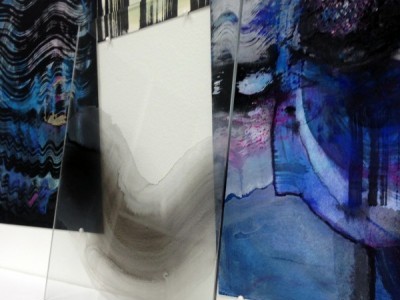 Agency, in Los Angeles is currently hosting a Julie Weitz exhibit from December 13th until January 3rd. Titled Here From Behind, it is a diagram of exploded consciousness. Across the walls of the space, Weitz has mapped out a timeline for an elusive narrative of physical and psychological formation and deterioration. Within this diagrammatical structure, Weitz intersperses and overlaps drawings with sheets of plexiglass that have been coated with accumulated layers of sprayed, drawn and washed imagery. The effect alludes to fluid states of consciousness; evoking moments of clarity and reflection, cloudiness and obscuration.  For Weitz, this is a visual recording of internal life.  In her spatial chronology, memory is the animated subject and time is its constant support.

Julie Weitz lives and works in Los Angeles. Her work was most recently exhibited in a two-person show (with Kamrooz Aram) at The Suburban in Oak Park, IL; and a solo installation of her video work Primordial Mirror was shown at Ware:Wolf:Haus in Dallas. Weitz has been featured in the New York Times, Art in America, Photograph Magazine and New American Paintings. She received an MFA from the University of Wisconsin, Madison in 2004 and a BFA from the University of Texas, Austin in 2001.

0
The Untitled Magazine December 13, 2014
No Comments Yet