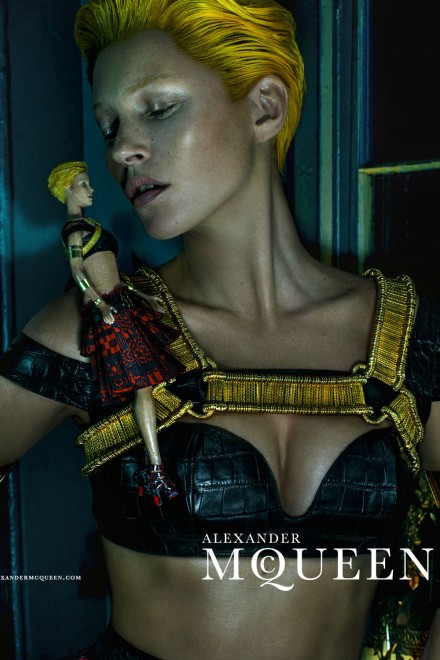 Kate Moss and Alexander McQueen go way back. McQueen counted her as one of his muses to the point of transforming her into a hologram centerpiece for his 2006 fall/winter show, and she has continued to walk in current designer Sarah Burton’s shows since McQueen’s death in early 2010. However, Moss surprisingly has yet to be the face for a McQueen ad campaign…until now. Less than two weeks after the supermodel turned 40, she was announced this morning as the face of the brand’s spring/summer campaign.

Shot by renowned photographer Steven Klein, the campaign features Moss transformed into a futuristic dame with a dark side, her yellow hair slicked back from her bronzed face and signature transfixing gaze coming from eerily white-rimmed eyes. Gold cuffs line up her arms, almost warrior-like, heavy accessories to match the the robust leather ensembles touting the exoticism of Cleopatra with the domineering confidence of bondage.

The campaign was inspired by the 1960s British thriller, “Peeping Tom,” and there is an element of playfulness, despite the daylight-less backdrop. A doll dressed similarly to Moss accompanies her throughout the photos as well as the video, in which a silent stalker follows Moss through empty streets into an unmarked apartment where she begins to undress sullenly before the film cuts off. In true McQueen fashion, the narrative takes an iconic theme from the past and turns it into something far ahead of our time. Moss, as always, is timeless.