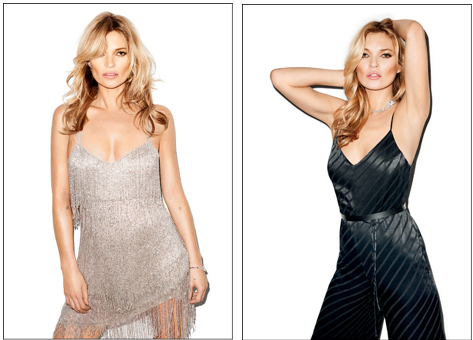 Who doesn’t love a good comeback story? Kate Moss will be making hers this May when she releases her second collection with Topshop. This is the first line that Moss has designed with the brand since 2010, which is a surprise since all of her work with Topshop has been highly successful. There’s no doubt that this long-awaited collection will do just as well- especially since it’s filled with more fringe, stars and glitter than a girl could hope for. Even with all of the glitz, Moss has assured her fans that this collection is much more sophisticated than her first collection with Topshop back in 2007.

Fans and clothing fiends alike can get their first glimpse of her designs in the May editions of both Vogue UK and Harper’s Bazaar. On the covers, Kate Moss personally models a silvery glitter-laden fringe jacket from the Spring/Summer 2014 collection as well as what seems to be a matching, shimmery, star-studded skirt. Fellow model Freja Beha Erichsen wears several other pieces inside of the issue that was styled by Ms. Kate Moss herself.

The collection makes its debut following the October 2013 announcement by Topshop that they would indeed resume their collaboration with Moss. The 40 year old model is also the face of Alexander McQueen’s SS14 campaign, Rimmel’s SS14 campaign and Liu J.’s pre-SS14 campaign.

DKNY: FREE GIFT WITH PURCHASE OF A FRAGRANCE