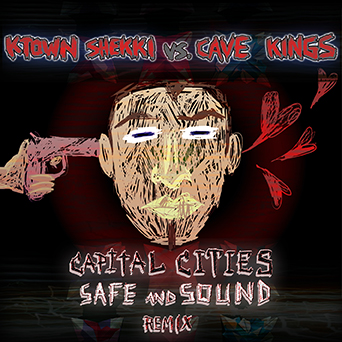 KTown Shekki is a new production crew hailing from Koreatown in Los Angeles. Using karaoke rooms as their studio, Casios swung over their shoulders, this loose collective of LA natives has emerged from a rising underground K-Town electronic scene, mashing up their favorite pop hits with grinding electronic beats and a no holds barred attitude that is reflected in the name: “shekki” means “punk” in Korean.

Swedish DJ duo, Cave Kings, just made their mark this year with one of the top mixes of 2013 so far with their “Scream & Shout” rework featuring Luciana. Their follow-up was the official remix of Robin Thicke’s “Blurred Lines” that hit the charts in Australia and Europe, and now they’ve teamed up with KTown Shekki for a set of banger collaborations this summer. They first kicked it off with their club-worthy take on Avicii’s “Wake Me Up” (ft. Aloe Blacc), which you can hear/share via SoundCloud. Combining house, electro and hints of trap, their latest remix of Capital Cities’ summertime hit, “Safe and Sound,” is rapidly clmbing the Hype Machine charts and is currently the #5 Most Popular Track on Twitter!