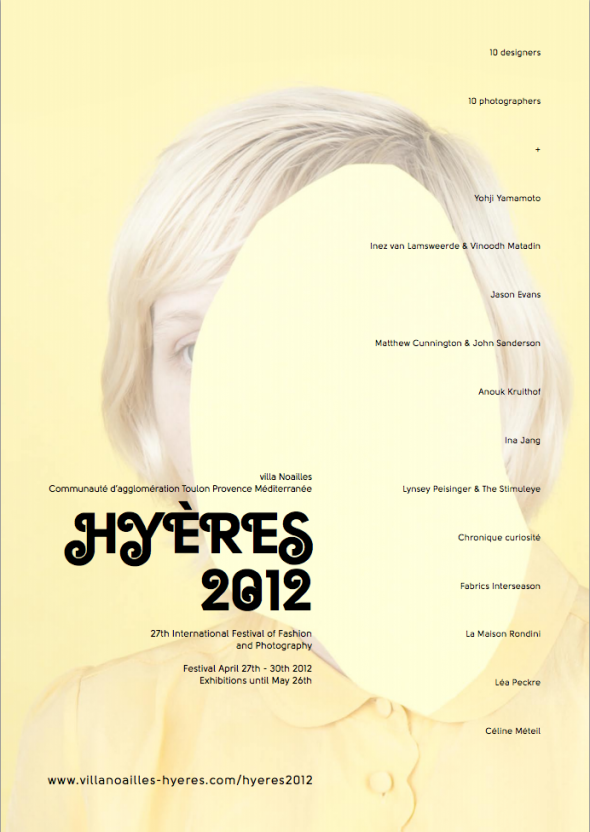 This past week, the winners of Le Festival International de Mode et de Photographie à Hyères were announced.  In fashion, Siiri Raasakka, Tiia Siren & Elina Laitenen, menswear designers from Finland, were awarded the L’Oreal Professionel prize which includes a 15,000 euro grant.  Estonian Ragne Kikas’s collection “Dress Code Defensive” won the Première Vision award, which comes with 10,000 euros, as well as this year’s Fashion Public Award from the city of Hyères, which is voted on by attendees of the festival.  Steven Tai took the final prize, the Chloé award, which came with 15,000 euros. In photography, Jessica Eaton of Canada won the Jury Grand Prize, and Florian van Roekel of the Netherlands won the first-ever Digital Photography LVMH Award.  Finally, Namsa Leuba from Switzerland was awarded a prize from The School of Visual Arts in New York.

Since it’s creation 27 years ago, Le Festival International de Mode et de Photographie à Hyères, lead by Jean-Pierre Blanc, has brought together fashion shows, exhibitions, and conferences that explore the boundaries between art, fashion, photography, and design.  Ten fashion designers and ten photographers were chosen to showcase their work at the festival and were judged by a jury of fashion and art industry insiders.   Four grants are awarded every year from L’Oréal Professionnel, Première Vision, Chloé, and the City of Hyères to aid these artists in beginning their careers.  This year’s judges for the ten fashion designers included important names in the industry, such as fashion designer Yohji Yamamoto, film director Christophe Honoré, founder of i’D Terry Jones, photographer Paolo Roversi, fashion editor Karen Langley, and creative director Irène Silvagni.  The photo artists were judged by photographers Jason Evans, Aaron Shuman, and Michael Wolf,  picture directors James Reid, Jody Quon, and Kira Pollack, and founder of Corso Como in Milan Carla Sozzani.  From April 28 to May 26 exhibitions will be presented in various locations throughout the villa Noailles, one of the first modern style architectural buildings in France, built in 1923 .  The exhibitions will include shows from Yohji Yamamoto, Inez van Lamsweerde and Vinoodh Matadin, Matthew Cunnington and John Sanderson, Ina Jang, and prize winning designers from last year Céline Méteil and Léa Peckre.  The festival provides an amazing opportunity for all of these different fields of art to be juxtaposed and influence one another.  By giving an opportunity for beginners in fashion and photography to interact with professionals in the industry, the festival prepares young artists to begin their careers and hone their craft.