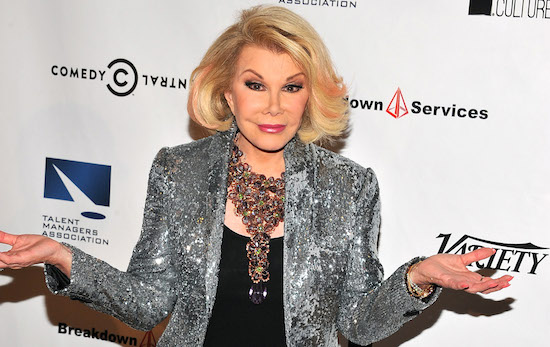 Quick-witted, raunchy, and fearless when it came to making her audiences laugh, the legendary comedian and former TV show host, Joan Rivers, has died at Mount Sinai Hospital in New York. After losing consciousness during a surgery on her vocal chords last Thursday on August 28th, Rivers was moved to Mount Sinai, where she’d been in a medically induced coma. “She passed peacefully at 1:17pm surrounded by family and close friends,” her daughter, Melissa, wrote in a statement that was released on September 3rd, 2014. “My mother’s greatest joy in life was to make people laugh. Although that it is difficult to do right now, I know her final wish would be that we return to laughing soon.” As for cause of death, the State Health Department is still investigating the conditions and circumstances that led to this tragedy. Rivers was 81.

Known for her vivacious and unapologetic commentary on everything, from her late husband’s suicide to her affinity for plastic surgery, Rivers pioneered a whole new place for women in comedy, an industry which used to be male-dominated. Born as Joan Alexandra Molinsky in 1933, Rivers began performing stand-up in local nightclubs and coffee shops in the 1950s, as a way to bring in extra cash for her dream of being an actress. Little did she realize, her confessional and self-deprecating style was actually really funny! In 1965, Rivers scored a guest slot on The Tonight Show with Johnny Carson — whom she considered a mentor — and the positive reception from audiences allowed her to continue appearing on the show on numerous occasions. In 1986, Rivers signed a $10 million contract with Fox for her own talk show called The Late Show Starring Joan Rivers, and her career never looked the same. Although Fox fired her after less than a year, followed by her husband’s suicide, Rivers continued to carry laughter with her everywhere she went. 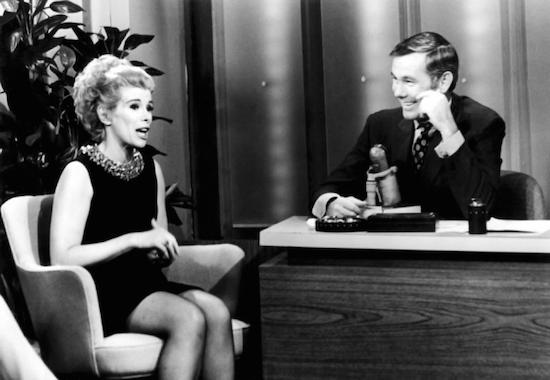 In more recent years, Rivers could be seen stopping celebrities at red carpet events, and accosting their probably Botoxed faces with questions like, “Who are you wearing?” While her earlier years as a comedian focused on making fun of herself and her upbringing, Rivers attracted younger audiences by her dauntless celebrity-bashing (when Rivers appeared on Comedy Central’s popular celebrity “Roast,” Kathy Griffin introduced her as “a legendary bitch”). In 2010, she joined Giuliana Rancic, Kelly Osbourne, and George Kotsiopoulos on E!‘s “Fashion Police,” a show that focused on criticizing celebritys’ sartorial choices.

For more than five decades, Rivers’ feisty attitude has lit up our televison screens, our stages, and even our bookshelves. A Grammy/Tony/and twice winning Emmy winner, Rivers was inarguably the trailblazer for women in comedy today. To commemorate Rivers’ achievements and huge success as a comedian, The Untitled Magazine has collected some of the comedian’s most memorable one-liners below:

1. [Her] face has been tucked in more times than a bedsheet at the Holiday Inn!

2. I said Justin Bieber looked like a little lesbian — and I stand by it: He’s the daughter Cher wishes she’d had.

3. I was so ugly that my parents sent my picture to Ripley’s Believe It or Not: they sent it back and said, “We don’t believe it.”

4. You know you’re getting old when you buy a sexy sheer nightgown and don’t know anyone who can see through it.

6. I’ve had so much plastic surgery, when I die they will donate my body to Tupperware.

7. I was so flat I used to put Xs on my chest and write, ‘You are here.’ I wore Angora sweaters just so the guys would have something to pet.

8. Grandchildren can be so f***ing annoying. How many times can you go, ‘And the cow goes moo and the pig goes oink’? It’s like talking to a supermodel.

9. All my mother told me about sex was that the man goes on top and the woman on the bottom. For three years my husband and I slept in bunk beds.

10. The only time a woman has a true orgasm is when she is shopping.