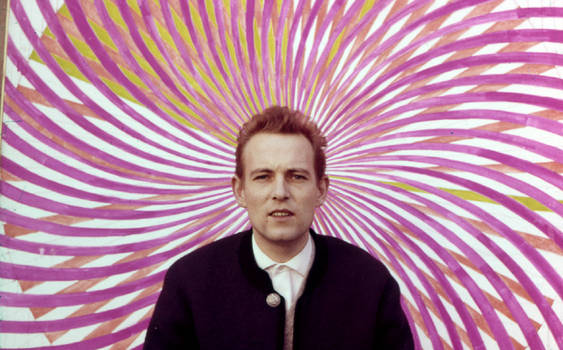 Manfred Kuttner (1937-2007) was one of the co-founders of Capitalist Realism. In 1963 he organised the legendary Demonstrative exhibition in the Kaiserstraße, Düsseldorf, together with his artist friends and colleagues Konrad Lueg, Sigmar Polke and Gerhard Richter. The exhibition can be seen as the nucleus of the so-called German Pop Art and of the worldwide success of Sigmar Polke, Gerhard Richter and the later gallery owner, Konrad Fischer. In 1967 Manfred Kuttner moved into the field of advertising art, ending his artistic career almost before it had properly begun.

The abstract, geometrically structured pictures and neon-coloured objects of Manfred Kuttner from the early 60s range ambivalently between such different styles as Op art, Pop art, Zero art, Informel and Nouveau Réalism. His use of the then brand-new Plaka fluorescent paint created a shimmering surface, invalidating attempts at classification. From today’s perspective, in the context of neo-abstract painting debates, Manfred Kuttner’s pictures seem highly relevant.

After more than 45 years, this show, assembled by the Villa Merkel together with the Langen Foundation, provides the first institutional overview of this oeuvre, terminated at an early stage. Along with paintings and drawings, objects, photographs and contemporary documents are presented, as well as his until now rarely shown film, A-Z, made in 1963.

To coincide with the exhibition, the first monograph on Manfred Kuttner is being published with essays by Christine Mehring, Birgit Hein, Franz Erhard Walther and Thomas Scheibitz, and a catalogue of works prepared by Sabine Sense.

The exhibition is curated by Marcus Weber, Andreas Baur and Christiane Maria Schneider.