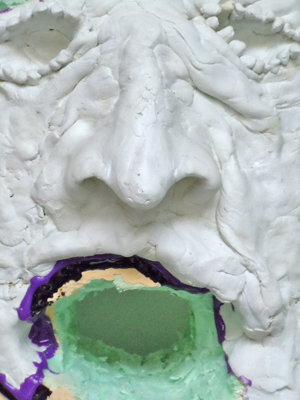 OPEN TO THE PUBLIC SEPTEMBER 6 – OCTOBER 13

Mariah Garnettʼs practice is rooted in re-interpreting found texts, using desire as an access point. For this exhibition, Garnett turns to the internet as a source, and considers language, space and bodies through film, video and prints. Reading spam as a new form of automatic writing, Garnett uses unaltered texts from these anonymous missives to consider the relationship of the physical world to the metonymic space of the internet. While the word “found” implies an active positioning on the part of the artist, here she receives and sorts material.

The script for Signal, a 7-minute, 16mm film, attempts to narrativize a collection of spam emails gathered over a 3-year period, and is staged in or near “sacred spaces”. The landscape of Pyramid Lake, on the Paiute Indian reservation is populated by 10,000-year-old rock formations, many of which are off limits to the public. They loom in the background as characters banter in the sometimes awkward, sometimes solicitous, sometimes nonsensical dialog of spam. The Black Rock Desert Playa, while vacant most of the year, is home to close to 60,000 people annually during Burning Man. These locations were chosen because they act as both mirror and foil for the internet – at once wastelands and gathering sites for millions of people, while maintaining an ancient physicality that transcends any inhabiting group.

Untitled (Eclipse), an 11-minute long video, scrolls plaintive found text over the image of the 2012 annular solar eclipse. In Chalk, Banana, Renovated, and Hose, language is physically added to an image, while in Improved Spire and Presence, pieces of the images are subtracted, both in negative and in positive.

Anton Lieberman works under the precept that time, as far as humans are concerned, is irrelevant. What separates the caveman from the astronaut is roughly the same as what separates Coke from Pepsi: one small step for man, one unimpressed, slack-jawed stare from the universe. Past and future melt into a gooey heap, spoonfuls of which produce confused, time-traveling objects, the logic of which is at once confident and flawed. Tools of unknown origin and function pop into being. Plants grow as if governed by an entirely new set of rules. Bits of technology force themselves onto nature. Anachronisms abound.

If we skew a few historical events or laws of physics and allow them to snowball over time, our entire universe becomes alien. Even as it stands, the life of a human and especially the existence of humans comes out of a string of near misses – celestial, political, genetic, or otherwise. Our relationship to this idea is a colossal intellectual struggle, marked by superstition and conjecture.

For this exhibition, Lieberman will present a group of sculptures, which supply humans with new superstitions and new relationships to their bodies and geometry. Rocky slabs smatter the walls with geometry that has been transposed from acomputer program. A log, hollowed out and filled with neon tubes, emanates colored light like electronic sap. These are the points at which technology intersects forcibly with nature – a Frankenstein moment of sorts.