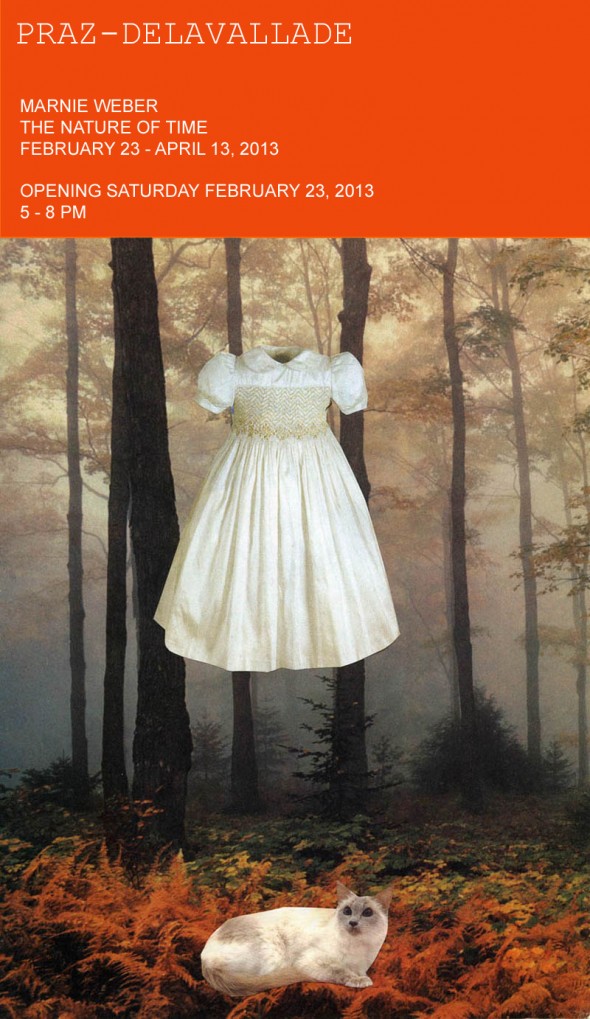 MARNIE WEBER
The Nature of Time

PRAZ-DELAVALLADE is pleased to present The Nature of Time, an exhibition with new work by MARNIE WEBER. Thematizing the passage of time, Marnie Weber’s new exhibition is composed of a series of painted panels representing the four seasons, and a series of 366 collages, called “The Diary Project”.

Time is defined and marked by our experiences. It is held accountable by occasions of note, sometimes events of importance and other times, not. Time is something that is hard to grasp and can only be reflected upon as memory, a photograph, a story or simply measured out by tic of a clock. Time can be fictionalized and romanticized through photographs and imagery that trigger our memories. As an artist who is interested in creating fiction and distorting reality, Marnie Weber is constantly viewing the world through eyes which look for the dramatic and theatrical over the mundane.

“The Diary Project” is an exploration and unearthing of thirty years of archived images. Marnie Weber imagined it as somewhat of a retrospective of her collected imagery in collage form, using photographic clippings from previous bodies of works, as well as imagery pulled from magazines. Making one collage a day, and given it was a leap year, there are 366 collages in total. Marnie Weber continued her other work as an artist all along: a trip to Oaxaca Mexico for Day of the Dead, hunting for monster masks, celebrating holidays, enjoying the seasons, shooting her new movie, creating exhibitions, doing performances, playing music and traveling are all reflected in these collages, as are many days of mundane happiness as well as some days of sadness and heart-ache. The colourful characters that appear in costumes are drawn from the artist’s work in performance and film. Dolls appear throughout as left overs from her earlier dollhouse series. Some of Weber’s early collage imagery, with nude figures taken from soft-core skin magazines, also re-emerges, and bodies of work such as “The Spirit Girls” are given yet another new life. Little girls and nature seem to be a reoccurring theme, and can be understood as a reflection on a childhood spent in the countryside in rural Connecticut. Hundreds of animals frolic through the days; ghostly apparitions, the spiritual and the surreal are as present as ever.

Accompanying the series of collages is a new series of painted and collaged panels that represent the four seasons in a romanticized and surreal manner. Arms sprout from tress in snowy vistas, bodies float through the summer sea, spring has little girls blooming as flowers, and fall is the artist herself in the character of a scarecrow. The show is to be viewed and understood as a culmination of the artist’s life. A life spent gathering imagery, working in collage, creating characters through costuming and performance, and revisiting all of these passions together in one place, image by image, day by day, and moment by moment.

LIVE STREAM FROM THE RED CARPET AT THE 85TH OSCARS