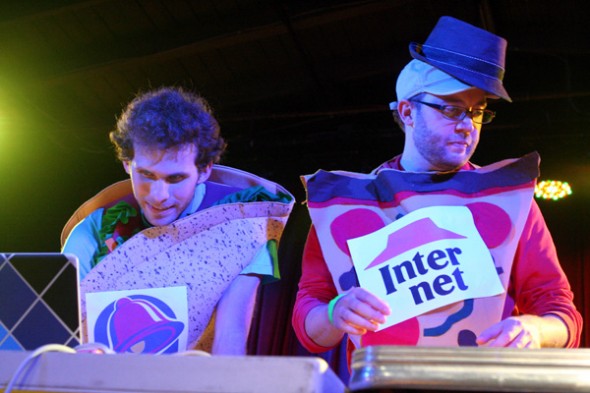 Bestselling author Malcolm Gladwell has become infamous for his “10,000-Hour Rule,” a theory that argues that the key of success in any field is a matter of practicing a specific task for 10,000 hours. This may explain why Chicago-based production duo The Hood Internet is still around.

The group, made up of members Aaron Brink and Steve Reidell (also known as ABX and STV SLV), has spent the past seven years perfecting the art of the mashup, a production technique that has gotten increasingly worn out due to a bevy of DJs clumsily smashing together tracks on their laptops and releasing them under the genre’s title. Brink and Reidell have stayed relevant by approaching their mashups as remixes, carefully blending vocals and instrumentals as if they were creating something whole and original. It would be difficult to find even one instance of carelessness in the group’s 500-song catalogue, which is saying a lot for any musician, let alone a mashup artist.

The Untitled Magazine got the chance to talk to Reidell, who just performed under The Hoot Internet name for the CMJ Music Marathon in New York. Reidell explained the group’s approach to crafting mashups, as well as its history and reputation.

I’ve read quite a few of your interviews lately, and it’s usually just you speaking. Has Aaron designated you the group’s spokesman?

Not always. He actually just did an interview on his own in Brooklyn this weekend. But I do a lot of the talking; I’m more talkative than him. When you’re at a show, you’ll catch me on the microphone far more than you’ll catch him.

On a semi-related note, I saw The Hood Internet play in Portland about a year and a half ago, and I think it was just Aaron DJing. Is that how you guys tour now – with just one member?

It really depends. I would say a majority of the time it’s me doing the touring. Aaron has a job in education. I have a little more free time, because I don’t have a day job, so I end up doing a lot, especially when it’s something like going on tour for a few weeks. But Aaron shows up when he can and is still extremely involved in the making of new tracks and working on remixes and that sort of thing.

And you two met in college?

One thing that fans often cite as a selling point for you guys is that you know music theory. Is that accurate?

In the band we were in, we both played guitar. It was one of those bands where there was some instrument switching for some songs. We both have a history of being in school bands, like I played the trumpet as a kid. I’m hesitant to throw around the term “multi instrumentalist” – just because I can find my way around a synthesizer doesn’t mean I consider myself a synthesizer player. But in the age of home recording, I think people are adept at playing a lot of instruments and figuring out what works.

Do you remember what your guys’ first attempt at a mash up was?

The first thing that came to the Internet was a mix of Clipse and Clap Your Hands Say Yeah. Noticing how receptive people seemed to be to that sort of thing, we said, “Oh, we sort of have the technical skills to do this. Maybe instead of making beats for our friends to rap over, we could download some accapella tracks and mix those instead.” We made that track and it got posted by Gorilla VS. Bear, one of the first music blogs. It also, later on, posted our (mashup) of R. Kelly and Broken Social Scene, which was kind of the thing that sent a lot of attention our way early on.

At what point did you guys realize that this could be something more than a hobby?

Even with all the music projects we’ve been involved with over time, (when we released our first mashup) was really exciting because the web server we were using kept crashing because of all the people that were downloading the files from there. That alone was encouraging, and then we started getting offers to DJ live sets, which drew the attention of booking agents. Once that all started going, Aaron and I got cautiously optimistic. We figured it would have momentum.

In terms of the mashups themselves, you’ve said you guys give them a little different twist. What would you say that twist is?

Obviously a frequent point of comparison for people is Girl Talk. While there are some similarities there, like (that we both) sample from a modern pop landscape, if you listen to his stuff, he samples quite a bit of material over a two-to-three minute piece of work. We treat our mashups sort of like remixes or singles, where we try to sample whole parts of songs. When I referenced that The Hood Internet has a bit of a different approach, it’s mostly that I think we’re drawing from our own catalogue of music that we like, and everyone listens to different shit. Indie rock is kind of the main thing that people type us for sampling and there’s absolutely some truth to it.

Do you believe mashup artists have a stigma?

A lot of people rally against mashups and think it’s sort of this pretty easy thing to assemble, like you can take an A part and take a B part and you’ve got a mashup. I’ve never appreciated that argument against it. A lot of things are easy to do. For all intents and purposes, guitar is easy to play, but not everyone is good at it. I think Aaron and I’s background in music gives us a slightly better ear for rhythm and melody and actually mixing stuff together in a pleasing way.

To go into the creative process, how does it work? Do you just hear a song you like and think to loop it in a way?

It really does depend. Sometimes I’ll maybe hear a loop in a song and maybe I’ll right away get an idea for a vocal melody or a rapper that it might mix well with. Sometimes the ideas work right away and other times there’s some trial and error and when the error outweighs the trial, we have to let it go. At this point, we’ve made over 500 of these over the past six years. There are certain tempos, certain melodic passages, how popular it is – a lot of stuff comes into play.

You’ve mentioned that you’ve never really gotten into legal trouble over the group’s songs and that actually a lot of artists who you’ve used have actually praised you. Who are some examples?

The first people that ever approached us were the Rosebuds and Blitzen Trapper. Rather than just asking us to do a mash up of their songs, they would give us recording stems and free reign to do whatever we wanted. That was cool, especially in our first year and from bands that we were listening to already.

Last year, you released “FEAT,” an album with all original production. Is that the direction The Hood Internet is moving toward?

We really like sampling stuff and making mash ups. It’s still very fun for us, and I think it’s what people expect from the Hood Internet. But we also have a history of creating music, and I think our interest in that continues as well. You might hear some instrumentals of stuff on the mash up side of things and instead of getting existing raps on there maybe we’ll get our rapper friends from Chicago to do it. We don’t really have a plan right now.

— Reed Jackson for The Untitled Magazine