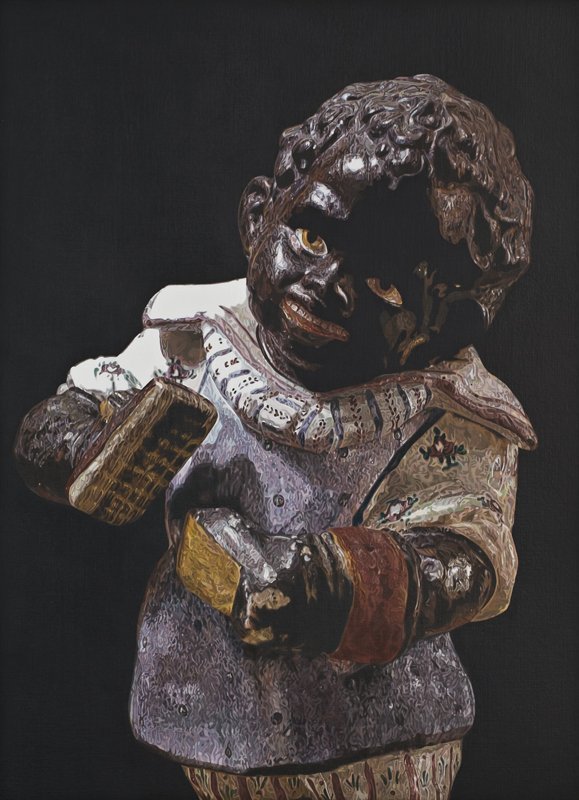 Alison Jacques Gallery is presenting a body of nine new paintings by British artist Mathew Weir. In these works Weir continues to fuse imagery of ceramic figurines with his archive of landscapes to create complex narratives with exquisite yet melancholic auras. By dislocating and re-presenting historic objects such as early 19th Century German terracottas or Victorian ceramics in uncanny contexts, Weir entreats the viewer to reconsider how our interpretations of their original representations have been transposed over time and to actively address notions of racism, oppression, violence and death.

Two works from this exhibition, Jar (2011) and Bitter Fruit (2012) contrast the depiction of a black adolescent through a derisory colloquial object and the seemingly idyllic representation of a white woman: in the former, a rendition from a Victorian ceramic tobacco jar makes a visual parallel between boot-polishing and the original subject’s skin, while in the latter the female figurine is dressed in elegant, pastoral drapes picking fruit for her basket as if in an Arcadian scene. The work’s title, however, alludes to Billie Holiday’s Strange Fruit, in particular her last line: ‘Here is a strange and bitter crop’. This, together with the headscarf around the figure’s neck, merges the violence of lynching with the Greek myth of Daphne becoming a tree.

Weir employs such layering of metaphor throughout his landscapes: an image of a waterfall referring to latent sexuality, a children’s see-saw to the idea of psychological balance. And even in those works in this show where he has deliberately sliced his figurines apparently out of context so that they loom at you from solid black backgrounds, this ominous duality of interpretation is rife. Glory, Hallelujah (2013) is based on a detail of a Staffordshire figurine depicting the American abolitionist John Brown, who himself was hung for insurrection, its title from the famous Civil War marching song sung in his honour. The original figurine is cropped to an intimate portrait, which makes our encounter with Brown directly charged. His ardent but mis-painted eyes stare out from what’s clearly a painting of a painted object – the quick, imprecise marks and cracks on the original mass-produced popular figurine contrasting with Weir’s exacting brushwork. This vulnerable martyr not only epitomizes emancipation and release for Weir, but also fragile disfiguration.