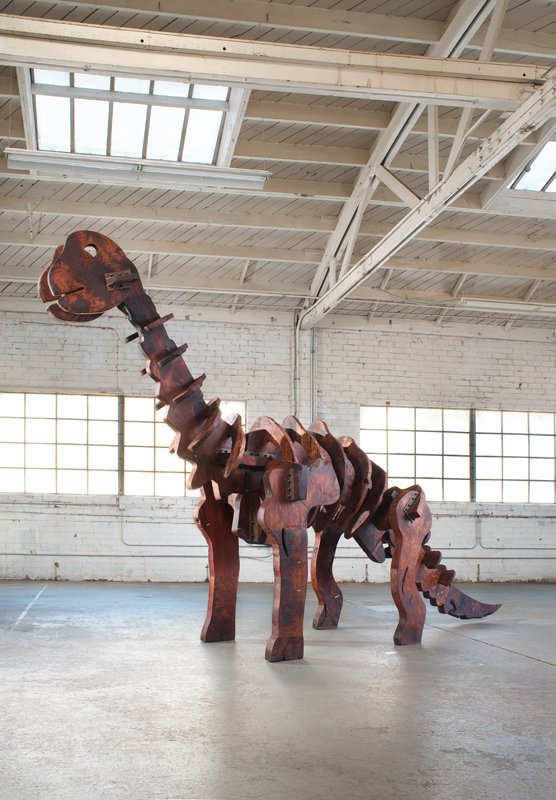 Matt Johnson’s second solo show at Alison Jacques Gallery is alive with plays on materials and fusions of physical and subject matter, but its overriding premise is decidedly simple: Time. Whether working with recycled old-growth redwood, carving million-year-old granite, or casting bronze to resemble fresh Styrofoam, this body of works is imbued with a curious combination of excavating the new while reanimating the ancient.

Johnson’s sculptures have always been marked by a restless nature, one that exhibits an ongoing struggle to bridge a conversation between the present and the past. This is evident through his use of references to canonical classical sculpture where traditional sculptural materials and those in their natural form are sifted through a contemporary lens. Not only does his work point to the origins of what it means to make a sculpture in the 21st Century – to put one rock on top of another, to approach an understanding of human knowledge by pointing to metaphors between meaning and material – but there persists in it a questioning of what one may learn from a collective history of research, trial and error, poetry and imagination.

In the main gallery space Johnson has created a sixteen-foot long, almost ten-foot tall model of an Apatosaurus dinosaur in sections of salvaged old-growth Californian redwood, which, crucially to the artist, is one of the contemporary subspecies of trees that coexisted with dinosaurs. The figure looms down at you but, however dramatic its large frame, it is unthreatening: a scaling up of the kind of children’s flatpack puzzle one finds in museum gift shops and enlarged to the approximate scale of a baby dinosaur.