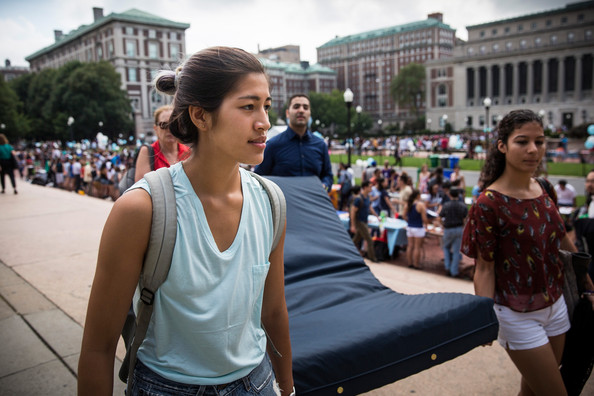 “Carry That Weight”, the interactive performance piece that has shed light upon major issues of sexual assault and rape on college campuses, is the product of Columbia University senior Emma Sulkowicz’s own experience of rape during her time at Columbia, and what she believes as the school’s mishandling of the incident. Since September 2014 Sulkowicz has garnered the world’s attention by carrying a 50-pound twin mattress for her senior art thesis, as a performance piece and protest.

At the beginning of her sophomore year at Columbia, Sulkowicz reports that she was sexually assaulted and raped by Jean-Paul Nungesser, whom she had had previous relations to. Sulkowicz did not report the incident to the university immediately, but after meeting two other women who revealed that Nungesser had also sexually assaulted them, Sulkowicz was prompted to seek help. The hearing took place seven months after Sulkowicz initially reported the rape, at which point the administration at Columbia University dismissed Sulkowicz’s case, along with the two other women that had reported assault by the same assailant. Following the university’s failure to act, Sulkowicz took matters into her own hands and exposed herself in the performance that has steadily gained traction since its inception earlier this year.

“Carry That Weight” dictates that Sulkowicz must bear the weight of a twin mattress – of which the rape took place upon – throughout Columbia’s Morningside Heights campus. She is able to accept help from anyone who offers, but may not ask for help. She will only carry the mattress on campus; outside she is free of its weight. Sulkowicz has stated that she will continue to bear the burden of the mattress for as long as her rapist is on campus – be it until he is expelled, he leaves, or until their graduation in May 2015.

Since September, Sulkowicz’s project has garnered the attention of the nation, inspiring a series of protests against sexual assault and rape, particularly those taking place within college campuses. On October 29th, hundreds of Columbia students, carrying rain-soaked mattresses marched on Columbia President Lee Bollinger’s home. They left 28 mattresses – representative of the number of complaints in Columbia’s title IX case – towering on his doorstep in protest of the university’s failure to reform sexual assault policies. This protest is only one of more than 130 protests that have sprung up across the globe in response to Sulkowicz’s powerful performance.

The issue of campus rape has also been brought to the attention of the White House, who in the past year has enacted a series of initiatives to combat sexual assault. Earlier this year, the Obama administration announced the formation of the “It’s On Us” campaign, which seeks to put an end to campus rape and reform the reporting and hearing process. A website, NotAlone.gov was created to track enforcement and provide information for victims of sexual assault.

Despite the attention and public concern Sulkowicz’s project has attracted, Columbia, to date, has refused to reopen the case, and the alleged rapist remains on campus. The figures of sexual assault, rape, and attempted sexual assault or rape amongst college campuses are still staggering, with reports stating that 1 in 4 college women have been victims of rape or attempted rape at some point in their lifetime. Sulkowicz’s project and experiences point to larger issues that are prevalent amongst college campuses, and which must be strictly addressed.

– Minka Bleakley for The Untitled Magazine