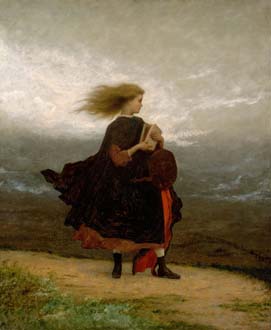 Despite the perception about museums not being “hip” enough these days, The Metropolitan Museum of Art has proven that it is! With its One Million visitor mark, and its ability to appeal to the masses, with exhibits such as Punk Chaos to Couture,  the Met has proven to be one of the most exciting places to see art.

(New York — August 2, 2013) Thomas P. Campbell, Director and CEO of The Metropolitan Museum of Art announced that attendance to its New Galleries for American Paintings, Sculpture, and Decorative Arts topped the one-million mark today. Since opening to the public on January 16, 2012, the expanded, reconceived, and reinstalled galleries have attracted an average of 2,000 visitors per day, or approximately 11% of the Museum’s total attendance during this time.
The New Galleries for American Paintings, Sculpture, and Decorative Arts provide visitors with a broad swath of American history—from the 18th through the early 20th century—through great works of art from the Museum’s collection. The suite of new galleries represents the third and final phase of a comprehensive, decade-long project to redesign the Museum’s entire American Wing. The earlier phases included galleries dedicated to the classical arts of America, 1810–1845, that were inaugurated in January 2007; and the reopening of the renovated Charles Engelhard Court and American Period Rooms in May 2009.
“The American Wing’s glorious new galleries provide an elegant 21st-century home for the Museum’s unparalleled collection of American paintings, sculpture, and decorative arts,” stated Mr. Campbell. “An estimated one-third of all visitors to the Met include a visit to The American Wing in their itineraries. Whether they are members of the public with a general interest in art,  international visitors, or schoolchildren, all of those who come to see our stellar collection of American art have responded enthusiastically to the new spaces, which have been redesigned and reconceived for the first time in 40 years.”Morrison H. Heckscher, the Lawrence A. Fleischman Chairman of The American Wing, added: “The Met’s American Wing is where so many visitors from around the world, let alone so many Americans, first get to see the artistic heritage of this country. So we are thrilled that one million viewers have now experienced the splendid new galleries of paintings, sculpture and 18th-century decorative arts that opened just last year.”
The New Galleries for American Paintings, Sculpture, and Decorative Arts added 3,300 square feet of gallery space to The American Wing, allowing for an in-depth, chronological installation of American art, and improved pathways connecting to adjacent areas of the Museum. Nearly all of The American Wing’s 17,000 works are now on view.
The centerpiece of the new installation is the iconic painting—one of the best-known works in all of American art—Washington Crossing the Delaware (1851) by Emanuel Gottlieb Leutze. Other well-known artists whose works can be seen in the new galleries include such American masters as: John Singleton Copley, Gilbert Stuart, Thomas Cole, Frederic Edwin Church, Winslow Homer, Thomas Eakins, and John Singer Sargent. Sculptors whose works are on view include: Erastus Dow Palmer, John Quincy Adams Ward, Augustus Saint-Gaudens, Daniel Chester French, Frederic Remington, and Frederick William MacMonnies.
The new galleries are featured on the Museum’s website http://www.metmuseum.org/en/collections/new-installations/american-wing.