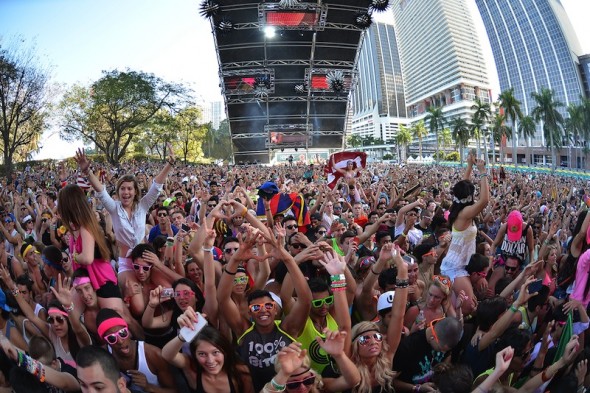 Ultra Music Festival ended Sunday night, wrapping up a weekend of dance music, partying, and all that comes with it. After 84 arrests, 153 rescues by paramedics, and a security guard in critical care, Miami Mayor Thomas Regalado and Commissioner Marc Sarnoff are no longer willing to host the city’s largest music festival, and are putting plans in place to see that next year’s permit will not be issued.

28 year old security Guard Erica Mack was trampled on Friday night by a crowd of ticketless gatecrashers who pushed through a weak spot in the fencing around the festival grounds. “She was not strong enough to deal with a mob of people that actually pushed this fence down, pushing her backwards and the fence landing on top of her. Now these people started trampling on top of her just to get into the event, as a result she sustained major head trauma as well as a broken leg,” said Miami Fire Rescue Lt. Ignatius Carroll; “She was doing what she was supposed to do. Telling them to stop.”

Mack was found on the ground with blood streaming from her ears and suffers from brain hemorrhaging and a broken leg. She remains in critical care at Jackson Memorial Hospital. The incident was preventable. Police had called for the area of fence Mack patrolled to be reinforced and nothing was done, representatives for Ultra claiming that this area of the fence was for water vendor access. The mayor stated that “What happened this weekend is an event that could have been avoided. The organizers of Ultra did not follow the police directive to re-enforce the fence, even though they knew that this year, and the year before, some kids have tried to overrun the fences.”

Similar gate-crashing events happened at last year’s festivities and are not uncommon at major music festivals. This marks another large music festival tragedy in a long series of events. In 2010, 21 people were trampled and killed at Loveparade, an open music festival in Dusseldorf, Germany. In 2011, a 19-year-old passed away and 30 others were hospitalized for heat, hydration, alcohol, and drug-related illness at Electric Daisy Carnival Dallas. Just a month ago at South by Southwest, a drunk driver plowed through a crowd, killing two and injuring over two dozen others.

There seems to be an inherent risk involved with such large-scale scale events and intoxicated crowds – but is the answer to ban them? Miami has decided. We’ll see if others follow suit.