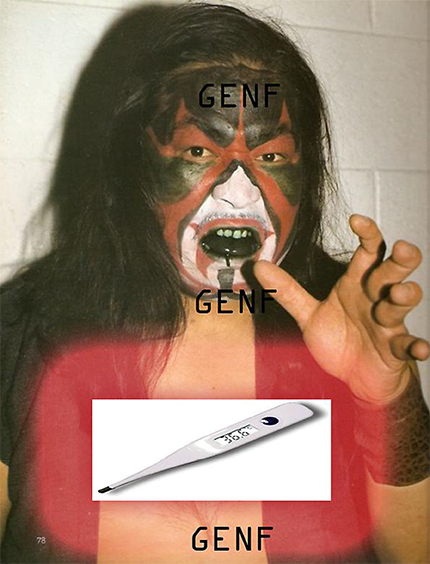 OPEN TO THE PUBLIC SEPTEMBER 13 – OCTOBER 27

Jancou, Geneva presents Hänkor (Ice-cream) – H.S.O.P. – 1973, an exhibition of new works by Michael Bauer. On view from September 13 to October 27, this will be Michael Bauer’s first show with the gallery and in Geneva. The exhibition includes a series of new paintings of varied formats, as well as works on paper.

Bauer’s paintings are rife with anthropomorphic forms emerging from dense clusters of abstraction, their silhouettes fading in and out of focus, oftentimes feathered or fragmented. These characters include cartoon-like profiles and a diverse menagerie of winged creatures; the artist has described the works as group portraits. Their compositions combine patterns from the realm of decoration and design— striped borders and paperweight-like polka dots— with passages of raw, gestural brushstrokes and emphatic squiggles that bring to mind the automatic drawings of an entranced Surrealist. In creating these works, the artist appears to employ every mode of paint application known to art history: globules of pigment squeezed straight from the tube lie atop thin veils of wash, while delicate beads of paint are draped in loose chains over swirling clouds of impasto. The tone of the paintings ranges from melancholic to exuberant, and with their cryptic titles and internal logic of signs and symbols, they resist easy interpretation. Even the title of the exhibition, the acronym “H.S.O.P.”, contributes to the works’ opacity: it is an arbitrary reference to the 19th-century American Hudson River School of painting.

Born in 1973 in Erkelenz, Germany, Michael Bauer studied at the Hochschule fur Bildende Kunst in Braunschweig, Germany. He currently lives and works in New York. His work has been the subject of numerous solo exhibitions at museums throughout Europe, including the Kunsthaus Baselland, Basel (2009); Villa Merkel in Esslingen am Neckar, Germany (2011); and Kunstverein, Bonn (2007). A monograph on Bauer’s work, entitled Borwasser, was published by JRP|Ringier Press (2008) with a catalog essay by Jennifer Higgie, co-editor of Frieze magazine.