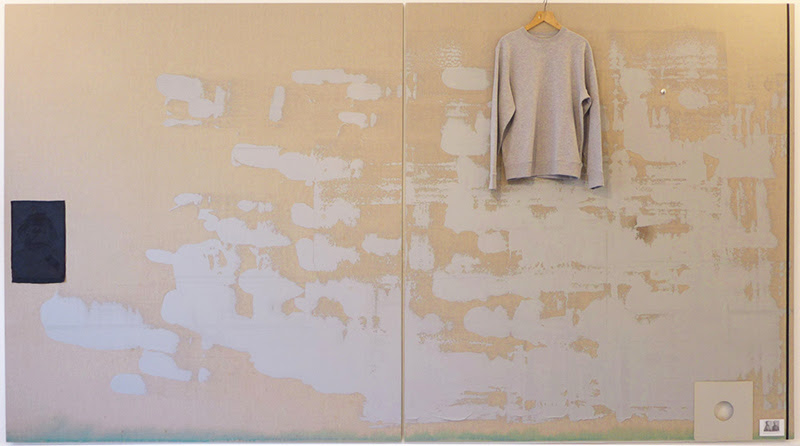 Michael Wilkinson, “Citadel: The fortress commanding a city, which it serves both to protect and to dominate.”

Furthering his experiments with collage as a formal and conceptual tool, Wilkinson’s latest sculptures and canvases examine notions of power and resistance through an intricate web of political, cultural, and personal references. Influenced by the histories of art and political radicalism, Marxist theory, popular music, and punk subculture of the 1970s and 1980s, the artist collects, dissects, and reproduces his source material in evocative ways. Subtly-layered, his compositions frequently operate through oppositions that probe ideas of interior and exterior, representation and reality, the monumental and the insignificant and work to restructure understandings of the past along with their manifestations in the present.

As a starting point for the exhibition, Wilkinson engages with the notion of capitalism as terrain, specifically a mountain. Drawing from books, found photographs, and advertisements, the artist often incorporates mountaineering imagery and equipment into his work to as symbols of power and capital, a concept inspired by the cover of Leaving the Twentieth Century, an anthology of writings published by the influential twentieth century revolutionary group, the Situationist International. In his work Gasherbrum, Wilkinson combines this reference with an image from a book by famous climber and author Reinhold Messner. The artist has enlarged the original photo and printed in long vertical strips to create the effect of an exterior seen through bars. As the half-tone dots become a visible part of the work, the viewer is at odds with the immense scale of the mountain and must choose between reading the dots and reading the image itself. The subject is simultaneously too close and too far.

The largest work in the show titled Citadel represents, as the title of the show implies, both protection and domination. Constructed using 53,000 white Lego bricks, this work functions as a structure of power, the main hub or shelter, but conversely, a prison cell. Similar to other sculptures in this body of work, Wilkinson recreates archetypal forms such as cubes and wall panels, as seen in the adjacent work, that are based on the dimensions of his own body. Echoing minimalist tradition, these works also act as walls, a motif that surfaces frequently in the artist’s work derived in part from Pink Floyd’s The Wall and more fundamentally from the Marxist concept of reification.

In contrast to Citadel, Wilkinson presents Sleep work, a deconstructed floor installation reminiscent of a prisoner’s cot, made up of an orange cagoule, a mattress of wool felt, a pillow made from a hospital laundry bag, a pair of desert boots, a piece of steel grill, wooden offcuts, a lens cover, a family photograph, volumes of the Communisation journal ‘Endnotes’ 1-3, and strips of reflective tape. If the logical facade of Citadel suggests a conscious self, Sleep work follows the logic of the dream, an unraveled set of associations, both personal and historical. Wilkinson presents notions of power and capital through a more intimate, humanizing lens, juxtaposing this work as a shelter to the mountain, a protester’s camp to the citadel.

On the opposite wall, a series of seven caged etched mirrored panels are presented like shop windows. Referencing the exterior of the 1970s London shop Seditionaries, famously owned by Punk impresario Malcolm McLaren and then girlfriend Vivienne Westwood, the metal grill has been reconfigured as a graph. Yellowed pieces of newsprint – pages of a 1982 issue of New Musical Express (NME), the artist’s first introduction to Marx – have been pushed into gaps in the cage. As the viewer looks through the cage, they catch glimpses of their reflections partly revealed through the etched mirror as if they’re inside, looking out.

Wilkinson probes similar ideas of radicalism and restraint more explicitly in other works by collaging historical ephemera such as mugshots of militant gang members, pages from history books and a 12” vinyl. A large two-panel painting with grey acrylic paint dragged across an unprimed linen surface subtly reveals mugshots of gang members know as ‘scuttlers’ from Victorian Manchester, and a silk brocade showing the face of Karl Marx dating from the Chinese Cultural Revolution, painted over with black paint. Let the dead bury the dead also features an image of prisoners and the bodies of executed Communards from the 1871 Paris Commune, alongside a page from a photograph book about West Germany’s Baader-Meinhof Group.

Perhaps the most jarring portrait is the first image the viewer encounters when entering the show: a half tone dot mirror showing the face of former Baader Meinhof member Ingeborg Barz, as it appeared on a “wanted” poster. Killed in the early 1970s shortly after she attempted to leave the group, here, enlarged and reproduced on mirror, she appears to be gazing outwards, away from the imagery of the exhibition. As evident in all of the artist’s mirror works in the show, one cannot help but see their own image in the reflection of the portrait.