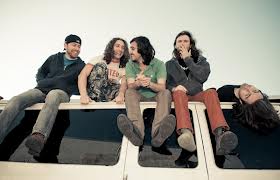 Shortly after releasing their debut album Don’t Let Me Sleep, MIDNIGHT SPIN has just embarked on a six-week nationwide tour in support of the album’s release. Between the album’s release and their show dates, Midnight Spin found time to invite Consequence of Sound into their home for their segment #AreaCode, a new series on the Rock It Out! Blog. Watch the interview here to learn the meaning behind the album’s title, their favorite neighborhood deli, and living in their rehearsal space. Today, Midnight Spin shares their second single “Conchis Bliss,” which just premiered with Absolute Punk. The five piece alt-rock band from Brooklyn, NY contains elements of classic rock’n’roll and 90s alternative rock, with a modern indie flare reminiscent of their Brooklyn home.

Produced by Justin Gerrish (Vampire Weekend, the Strokes, Weezer), Don’t Let Me Sleep is the result of endless bleary-eyed practice sessions and late night stumblings across the East River, which inspired and yielded a full-length album worthy of its name. From Cohen spacing the record with wurlitzers and organs to Scull bashing it out like the Grohl of yore, the twelve-song LP combines 90s alternative and punk energy with modern indie elements from their Brooklyn home. As Consequence of Sound writes, “Imagine if Foo Fighters somehow grew up as fans of early the Killers with a little of the Strokes tossed in for flavor.” It’s an album that just can’t stop chasing the night.

Don’t Let Me Sleep scrapes together everything you once loved about rock music and makes it hum again like a dirty, little noise-box from the future. Catch the band on tour in a city near you.